Leonard Pitts: Fortunately, the faith of force and exclusion is not the only faith 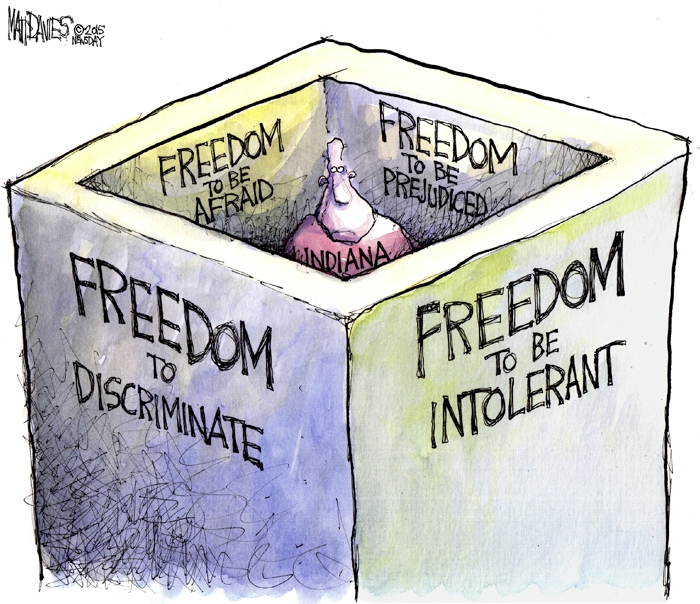 On Sunday, people all over the world will commemorate the morning an itinerant rabbi, falsely convicted and cruelly executed, stood up and walked out of his own tomb. It is the foundation act for the world’s largest faith, a touchstone of hope for over 2 billion people.

But that faith has been a source of ongoing friction between those adherents who feel it compels them to redeem tomorrow and those who feel it obligates them to restore yesterday. Last week, the latter made headlines — again.

In Arizona, a state senator suggested a law making church mandatory as a way of arresting what she sees as America’s moral decline. When controversy erupted, Sylvia Allen said she couldn’t understand what the fuss was about.

In Indiana, meantime, the governor signed a law protecting businesses from anything that might infringe upon their “free exercise of religion.” In other words, it protects their right to discriminate against gay people. When controversy erupted, Gov. Mike Pence claimed this interpretation of the “Religious Freedom Restoration Act” misreads its intent.

The senator’s ignorance and the governor’s disingenuousness offer stark illustration of what too often these days masquerades as faith.

Allen, like the Taliban before her, seems to believe faith is something you can coerce. Unfortunately for her, that’s expressly forbidden in the first words of the First Amendment to the Constitution that her oath of office requires her to support. She might want to read it sometime.

As to Pence, his claim that the law is being misread is undercut by the fact that it is being celebrated by anti-gay lobbyists. He has contended the RFRA is as innocuous as similar laws passed by other states and the federal government, a claim sharply disputed by law professor Garrett Epps, writing online for The Atlantic, who notes there is language unique to Indiana’s law that seems designed to let businesses refuse service to gay people.

But the most damning witness against Pence has been Pence himself. Five times last Sunday, ABC’s George Stephanopoulos asked him a simple yes or no question: Does the law permit discrimination against gay people? Five times, he refused to answer. By Tuesday, Pence was promising to “fix” the miserable thing. Stay tuned.

Taken together, Allen and Pence exemplify a “faith” that has become all too common, a U-turn faith that seeks to return America to a mythic yesterday. Pence’s law would effectively allow businesses to give gay people the kind of mistreatment that was common 40 years ago, while Allen explicitly says she wants to go back to the way things were when she was a child. For the record: Allen turns 68 this week.

And so it goes with this faith of force and exclusion. Thank God it’s not the only faith there is. Indeed, in the same week Allen and Pence were making fools of themselves, a pastor in Miami was pushing for socially conscious redevelopment of a blighted inner-city community, a church in Los Angeles was hosting a panel on police-involved shootings and a preacher near Washington was recruiting men to mow lawns, clean up trash-strewn lots and mentor troubled boys.

This is the faith of sacrifice and service. Unlike the faith of force and exclusion, it gets no headlines, generates no heat. It just is.

But one is thankful it is. One is glad for its example and reminder.

This week, Christians mark the long ago dawn when the Son rose. But if that faith means anything, it means the ability and imperative to face what is without fear. So faith ought not pine for the old days.

After all, dawn is the breaking of the new.

Pitts writes for The Miami Herald. Contact him at lpitts@miamiherald.com.