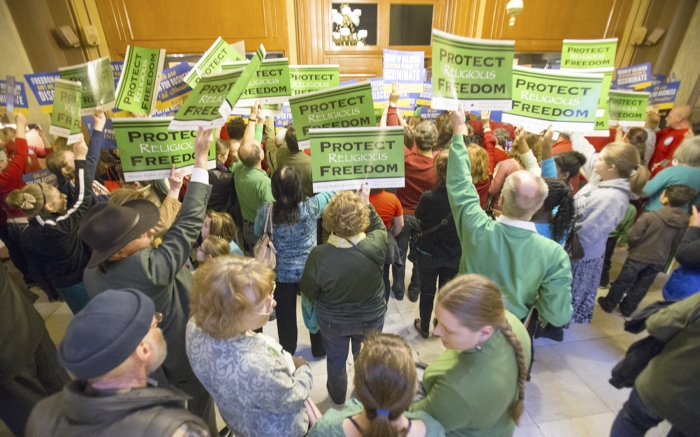 Community members on both sides of the issue stand outside of the Indiana House chamber during a meeting of a committee to discuss the merits of the Religious Freedom Bill, at the state Capitol in Indianapolis last month. Supporters say the bill would allow those with religious objections to refuse services for same-sex weddings, which federal courts legalized in Indiana last year. (AP Photo/The Indianapolis Star, Robert Scheer)

Excerpts from editorials and columns about the Religious Freedom Restoration Act:

The paradox is that even as America has become more tolerant of gays, many activists and liberals have become ever-more intolerant of anyone who might hold more traditional cultural or religious views. Thus a CEO was run out of Mozilla after it turned out that he had donated money to a California referendum opposing same-sex marriage.

Part of the new liberal intolerance is rooted in the identity politics that dominates today’s Democratic Party. That’s the only way to explain the born-again opportunism of Hillary Clinton, who tweeted: “Sad this new Indiana law can happen in America today. We shouldn’t discriminate against ppl bc of who they love.”

By that standard, Mrs. Clinton discriminated against gays because she opposed gay marriage until March 2013. But now she wants to be seen as leading the new culture war against the intolerant right whose views she recently held.

The same reversal of tolerance applies to religious liberty. When RFRA passed in 1993, liberal outfits like the ACLU were joined at the hip with the Christian Coalition. But now the ACLU is denouncing Indiana’s law because it wants even the most devoutly held religious values to bow to its cultural agenda on gay marriage and abortion rights.

Liberals used to understand that RFRA, with its balancing test, was a good-faith effort to help society compromise on contentious moral disputes. That liberals are renouncing it 20 years after celebrating it says more about their new intolerance than about anyone in Indiana.

The row over Indiana’s religious liberty law breaks new ground in the war between religious liberty and the liberal political agenda. If there’s no conflict, you have to make one up. This contretemps blew up out of nowhere, and inquiring minds want to know how and why it happened.

Anyone who thinks there’s not a war against those of religious faith, if not religion itself, has not been paying attention. The Wall Street Journal says religious liberty is losing the war with the liberal agenda, and it’s hard to argue with that. The army of the Lord only sees its generals run to the tall grass at the first sound of the pop guns.

The Democrats and their shrill allies in the gay rights lobby needed a beef with somebody, and the Indiana law lay conveniently at hand. The Democrats, morose and dejected after the drubbing they took in the congressional elections that left them with the fewest members of Congress in 80 years, and stuck with an exhausted and bruised presidential candidate that nobody really wants, looked for something to put a little fire in partisan bellies.

One of the difficulties in this discussion, from a conservative perspective, is that the definition of “common sense” and “compromise” on these issues has shifted so rapidly in such a short time: Positions taken by, say, the president of the United States and most Democratic politicians a few short years ago are now deemed the purest atavism, the definition of bigotry gets more and more elastic, and developments that social liberals would have described as right-wing scare stories in 2002 or so are now treated as just the most natural extensions of basic American principles. (Rod Dreher calls this the “law of merited impossibility,” in which various follow-on effects of same-sex marriage are dismissed as impossible until they happen, at which point it’s explained that of course they were absolutely necessary.) Of course all of this is happening because underlying attitudes have changed rapidly, and what’s politically and socially possible is changing with them; that’s all understandable. But the pace involved is unusual, and its rapidity makes it very easy to imagine that scenarios that aren’t officially on the table right now will become plausible very, very soon.