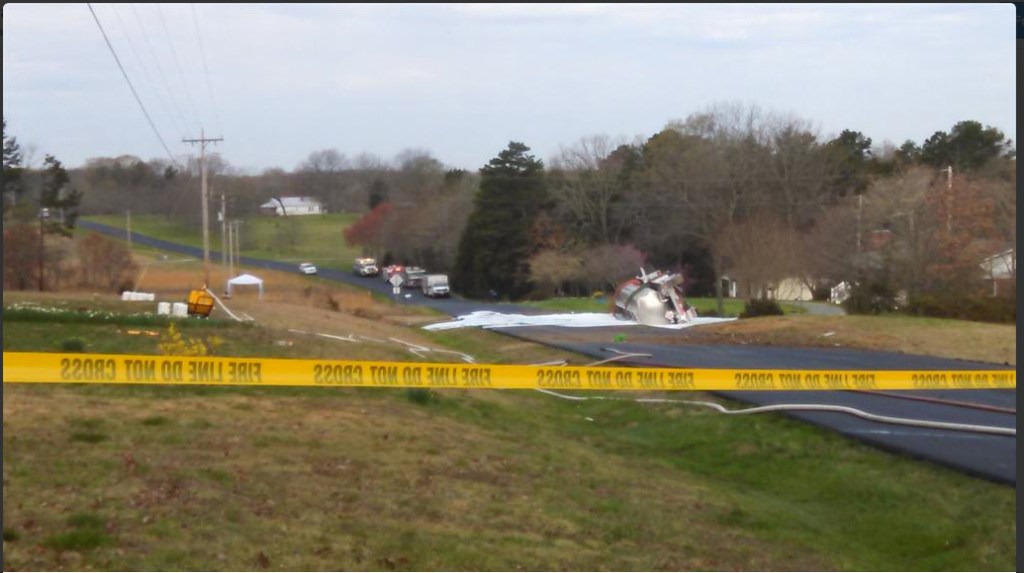 UPDATE: Officials have not released the name of the driver of the tractor trailer that overturned on Bringle Ferry Road. According to N.C. Highway Patrol Trooper J.G. Leonard, officials haven’t been able to give notification to the family as of yet, he said.

The driver was the only one in the truck, Leonard confirmed.

The N.C. Highway Patrol is investigating the crash, but because of the fuel spill they have not been able to begin an in-depth investigation. Contributing circumstances to the crash have not yet been determined.

10:50: Emergency crews continue to clean up after a tanker rolled over on Bringle Ferry Road.

The driver of the tanker was killed in the accident, but his body is still inside the truck because crews have to clean up the ethanol spill and roll the tanker over before they can remove the body.

The name of the driver has not been released. Officials said he was with Ecosystems out of Franklin, Tenn.

The scene is in the area of 11510 Bring Ferry Road, which is near Panther Creek Road not far west from the Pooletown area. A portion of the road is blocked off as crews continue to work.

According to a release from the N.C. Department of Public Safety, the tanker was carrying 6,000 gallons — earlier reports said 8,000 — of ethanol when it rolled over around 6:45 a.m. causing a leak. A small number, three or four, of homes in the area had to be evacuated due to the spill. But officials said no residents were harmed.

The scene is now considered safe, officials said. The leak has been contained, but emergency crews will be at the scene all day cleaning up.

Officials said the concern early on was that an explosion could happen because ethanol is highly flammable.

The tanker was coming from a fueling terminal in Denton when it ran off the road and overturned on the driver’s side.

There are 14 agencies on the scene totaling 75 personnel. Haz-Mat teams from Rowan, Mecklenburg, Cabarrus and Davidson counties have responded to the scene.

10:35:  Additional manpower has been called to the scene to assist with the cleanup.

The driver of a tanker truck carrying ethanol died this morning when his truck overturned on Bringle Ferry Road, according to media reports.

The area in the 11000 block of Bringle Ferry, near Panther Point, was being evacuated as Haz Mat teams dealt with the highly flammable substance.

The tanker was carrying 8,000 gallons of ethanol.

Officials at the scene said the driver was trapped inside; rescuers were not able to reach him due to the fire risk.