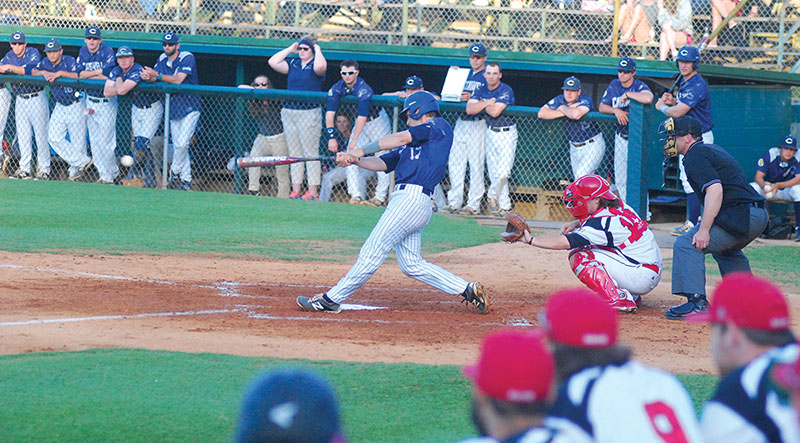 ADAM HOUSTON/THE SALISBURY POST Catawba catcher Will Albertson (17) smacks the ball to left field on Wednesday in a non-conference game against Winston-Salem State at Newman Park. Albertson tied a school record with eight RBIs; a grand slam, a three-run home run, and an RBI single in the third inning.

Albertson is hitting an even .500 34 games into his amazing season.  He has 16 homers and 60 RBIs and is among the Division II national leaders in all three triple-crown categories.

“Every day we come to the ballpark expecting him to do something great, and every day he does it and he still stays so calm about it,” Catawba closer Ryan McClintock said. “I faced him twice in intrasquad games and got him out once, so I guess I held him to his average.”

McClintock set a record of his own on Wednesday. The reliable, durable, submarining closer took the mound for the 98th time for the Indians, breaking the career record for appearances set by Travis McSweeney in 2010.

“Coach (Jim) Gantt has put me out there a lot and I just try to do my job,” McClintock said. “My infielders have been great behind me.”

Catawba (28-6) played its worst game of the season Tuesday, making six infield errors and losing to Pfeiffer 11-4. McClintock said all the leaders had something to say before Wednesday’s game, and obviously everyone responded. Catawba had 18 hits and played solid defense behind starter and winner Matt Farmakis, who worked five sharp innings.

“Coach Gantt had a pretty good speech too,” said senior pitcher/third baseman Craig Brooks, who leads the nation in strikeouts with 100. “We had a rough game Tuesday, but it’s a lot better to have it now than later when it means more.”

Brooks got the Indians started with a solo homer in the second. Albertson singled home Blake Houston for a 2-0 lead in the third.

Albertson’s three-run homer to left-center highlighted a seven-run fourth inning that blew it open. Albertson’s encore was a grand slam to left in a six-run fifth. Officially, he went 4-for-5. The out was a liner at the right fielder.

Smith, batting second in front of Albertson, capped the scoring with a two-run blast in the eighth.

“I’m just trying to lay off the high pitches and swing at strikes,” said Smith, who played with Albertson on the Randolph County Post 45 American Legion team. “Batting in front of Will, it’s not like anyone wants to walk me. I’ve been watching Will hit for years.”