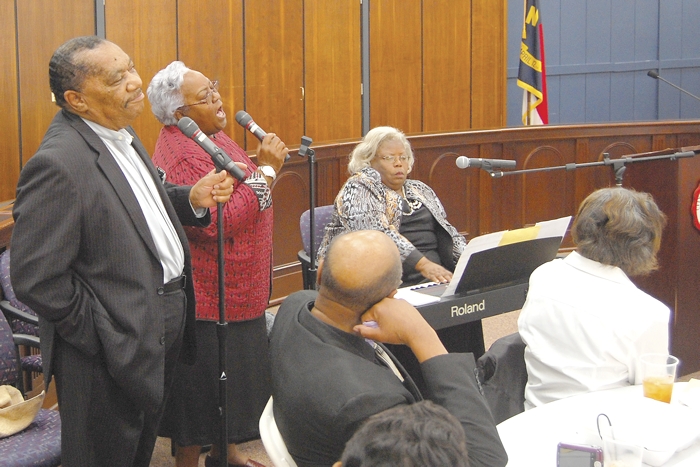 Albert Stout Jr, Rebecca Stinson and Phyllis Partee, playing piano, perform during the Mayor's Spirit Luncheon Tuesday at City Hall. The group was honored for their years of bringing the community together through music.

The sound of music and song filled City Hall Tuesday during the annual Mayor’s Spirit Luncheon.

Rebecca Stinson, Albert Stout Jr. and Phyllis Partee were honored for their years of bringing “harmony” to the community through music. Mayor Paul Woodson presented them each with a plaque commemorating their service to Salisbury.

The trio, who sing a variety of music including jazz, blues and gospel, and have been featured at numerous community events and celebrations over the years, performed for the crowd after lunch and a few remarks from Woodson.

Woodson said Stinson, Partee and Stout, through their musical talents, bring people together.

Stout and Stinson sang while Partee played the piano. They performed snippets of songs they said encourage social awareness and inspiration. They started and ended with “I Have A Dream” — a song written for Martin Luther King Jr.

The group received a standing ovation after their performance.

Afterward, Stinson said as a child her mother wanted her to sing even though she didn’t want to.

Growing up, she and Partee had the same piano teacher, Francis Emmerson.

Partee said it’s always nice to have the opportunity to sing and play for people. “I think that’s my calling,” she said about being a musician.

Stout, who comes from a family of musicians, said “music is soothing.”

“I like music because it’s pleasing,” he said, adding that he enjoys all types of music. “The harmony of it is beautiful,” he said.

“It’s been great,” Stinson, a member of Providence AME Zion Church, said about her years of singing.

Partee has been a member of Crown In Glory Lutheran Church for over 40 years. She also plays for New Hope AME Zion Church where Stout is a lifelong member.

The purpose of the luncheon was to bring different groups of people together to strengthen the community, Woodson said.

Buddhist, Jewish, Islamic and Christian prayers were recited by members of each faith. And the benediction was done in Spanish.

The program was sponsored by the Covenant Community Connection, a subcommittee of the Salisbury-Rowan Human Relations Council.