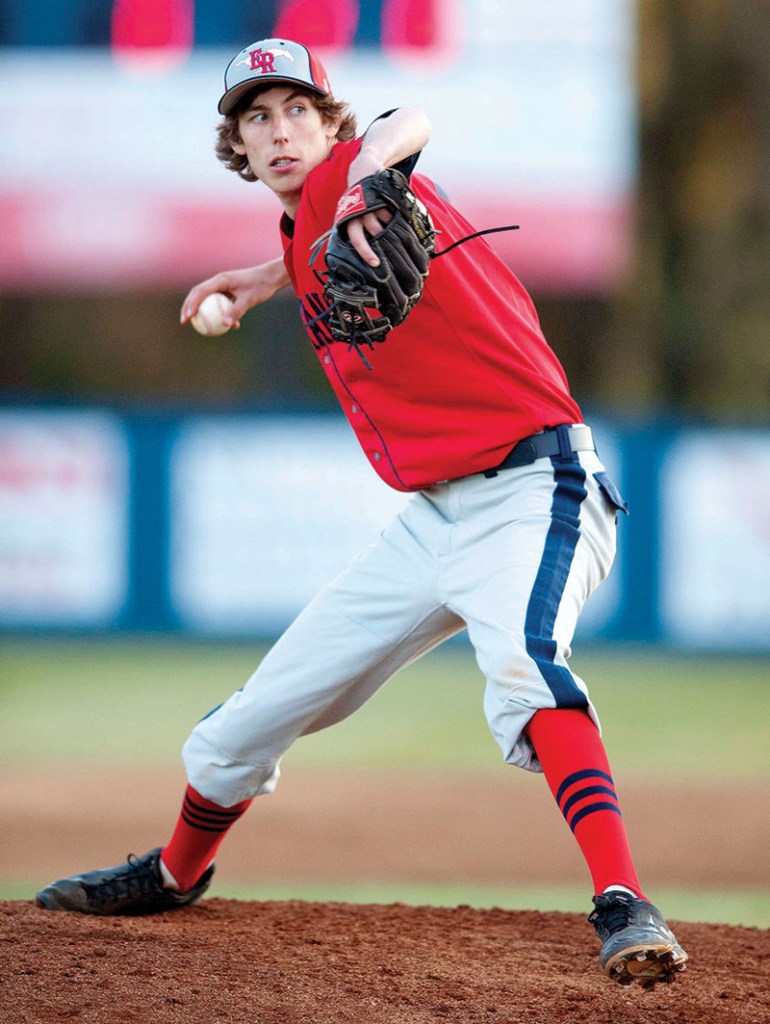 “That’s really hard on a pitcher,” East Rowan shortstop Ike Freeman said. “It’s hard to keep pitching well when your team can’t score. We got a few runs for him tonight, and he was dealing.”

Headed to UNC Wilmington, Peeler (2-2) looked great on Tuesday at Staton Field and was the winning hurler as the Mustangs beat North Rowan 4-0. Freeman, a junior UNC commit, provided run support with a no-doubt-about-it, two-run homer to left field in the fifth.

“We’ve been struggling,” Peeler said. “But this was better. We played as a team tonight.”

Peeler struck out 11, walked one and held the Cavaliers to two hits. Those hits were firmly struck backside singles by Javin Goodine in the third and fifth innings.

“Joe’s fastball was on and his curveball was on,” added East Rowan’s sophomore catcher John Owen. “They couldn’t hit him.”

Lee Sells matched zeroes with Peeler, throwing four scoreless innings for the Cavaliers, with the help of stout infield defense.

“Lee got into trouble, but he did his job, and we gloved it well behind him,” North Rowan coach Aaron Rimer said. “We wanted three or four innings from Lee. Then we were going to the bullpen. We really like our bullpen.”

East Rowan’s three-run fifth against reliever Cory Fries (1-2) decided the game. Daniel Gonzalez walked and stole second to lead off the inning, and when Owen laid down a nice bunt, just trying to move the runner to third, it became the key play. The Cavaliers failed to execute, Gonzalez scored, and Owen advanced to second base.

“That one bunt play opened up the door for them,” Rimer said.

Then Samuel Wyrick executed with a groundball that moved the runner to third.

Next, Freeman, who was thinking sacrifice fly, hit a pitch out of sight to left for his first homer of the season.

“I wasn’t guessing,” Freeman said. “Runner at third and one out, I just went up there trying to barrel something.”

“We had several quality at-bats in the fifth inning,” Hightower said. “Guys did what we’ve been trying to teach them to do. Ike got the bat head out, and that’s something we’ve been working on. He got his pitch, and he hammered it.”

The Mustangs (9-5) had eight hits. Seth Wyrick stole home for East Rowan’s final run in the sixth. He dashed home from third when the Cavaliers tried to pick a runner off first.

“We’re still not scoring like we should,” Freeman said. “Those games where we’re getting a bunch of hits but not scoring runs, that can’t happen anymore.”

Joe Harrison finished up on the mound for the Cavaliers.

North Rowan (6-5) takes on Hickory Ridge at Staton Field Wednesday at 4:30 p.m. The Mustangs take on the Charlotte Stampede at 7 p.m.