Freedom to discriminate in name of religion? 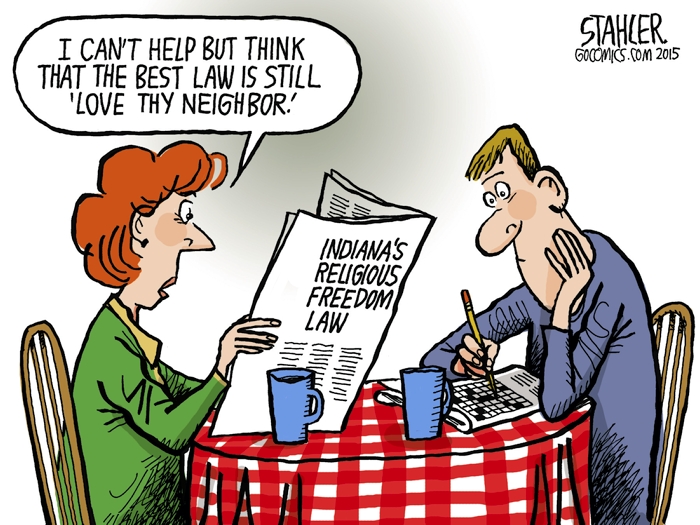 Indiana has become an overnight pariah because of its law, which many see as enabling discrimination against gays and lesbians. Those sounding off against the state range from the CEO of Apple to officials with the NCAA Final Four, all expressing doubts about doing business in Indiana. The Indianapolis Star published a front-page editorial beseeching state lawmakers,  “FIX THIS NOW.”

Indiana is not alone. There’s been sudden interest in passing state versions of the federal Religious Freedom Restoration Act in a number of states. Religious conservatives hope the laws would, in the words of one Charlotte pastor, “protect Christians from governments eager to advance the agenda that sexual rights are superior to religious liberty.”

Other political and business leaders are more concerned about protecting the states from over-reaching conservatives. The speaker of the N.C. House, Tim Moore, talked Wednesday about studying the proposed law’s impact on the state’s “brand.” Here’s a hint from Apple CEO Tim Cook, writing in the Washington Post: “From North Carolina to Nevada, these bills under consideration truly will hurt jobs, growth and the economic vibrancy of parts of the country where a 21st century economy was once welcomed with open arms.”

The Supreme Court cited the federal Religious Freedom Restoration Act last year when it sided with Hobby Lobby, ruling that the corporation is exempt from Obamacare’s contraceptive mandate because of the owners’ religious beliefs. Foreseeing the battle ahead over gay marriage, perhaps, the court said the Hobby Lobby ruling does not “provide a shield for employers who might cloak illegal discrimination as a religious practice.”

The governor of Indiana insists the new religious freedom law is not intended for that purpose and has vowed to look at clarifying the law to make clear it does not permit discrimination. If he can do that successfully, other states should follow suit.

But that still begs the question N.C. Gov. Pat McCrory raised about the religious freedom bills here: What is the problem they are trying to solve?