Today’s the day for Habitat chicken 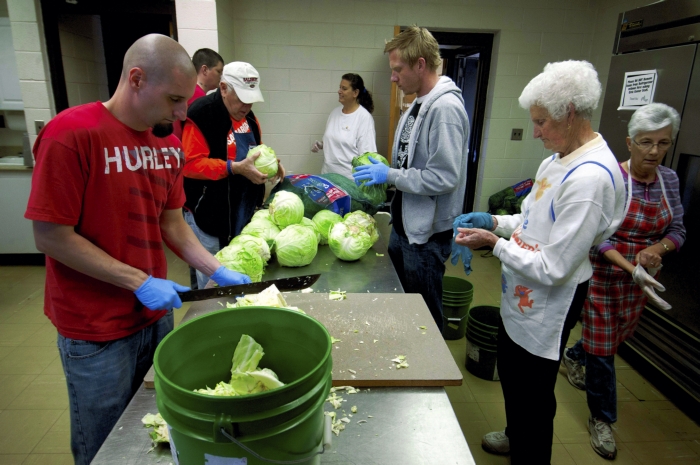 JON C. LAKEY / SALISBURY POST Bryan Smith (left) uses a machete to chop cabbage heads into chunks before they are put in a chopping device. Workers gathered at the Salisbury Civic Center on Monday to begin preparation for the annual Port-A-Pit barbecue chicken fundraiser for Habitat for Humanity. Over 5,000 chicken plates are expected to be served from the Civic Center between 11 a.m. and 7 p.m. today.

Somehow over the years — don’t ask her how long, because she doesn’t know — Joy Gerock inherited the job of making sure everyone has a job so today’s big fundraiser for Habitat for Humanity of Rowan County happens.

This last Tuesday of every March, when Habitat sells its $8 Port-A-Pit barbecue chicken dinners, is not a date on the calendar Gerock, a volunteer herself from Trading Ford Baptist Church, dreads to see coming.

Today’s Port-A-Pit chicken dinners will be sold from 11 a.m.-7 p.m. at the Civic Center, 315 S. Martin Luther King Jr. Ave. People can dine in or carry out. Two drive-through lines — the most efficient in town, Emerson said — also are available.

Proceeds go toward this outreach ministry dedicated to the elimination of substandard housing and putting people in homes. Since 1990, 109 Habitat houses have been built in Rowan County, and three more are now under construction.

“All of this is about that,” Emerson said, watching the bustle of activity among the volunteers Monday morning. “That is the end result of all this effort.”

Much of the preparation Monday morning went into making the slaw. People wielding machete-type knives took bold whacks at the heads of cabbage, the pieces of which were ground up and mixed with crushed tomatoes, pickle relish, salt, pepper, mayonnaise, celery seeds and vinegar.

It’s a Habitat recipe handed down from the days of the late H.B. Keen, who first started these barbecue chicken fundraisers not long after Habitat formed.

Five gallons of slaw were mixed at a time in the Civic Center kitchen.

A whole other room was devoted to the sorting and bagging of cakes. Some of the desserts came from Select Bakery in Rockwell, while others were homemade by volunteers.

It’s difficult for homemade cakes to keep up with demand. More than 5,000 chicken dinners will be sold on what’s forecast to be a beautiful spring day.

The dinners include a half-chicken, slaw, potato salad, roll, dessert and drink for the people dining at the Civic Center. The carry-out orders do not include a drink.

Jane Hartness, Habitat’s volunteer coordinator, lines up all the churches, schools, businesses and other groups who help. Emerson said about 200 people end up being involved.

Providing assistance Monday morning was a group from Path of Hope Inc. of Lexington, which is a state-licensed substance abuse residential treatment facility and halfway house. The group was supervised by Angie Banther, Gerock’s daughter.

Gerock first started volunteering for the dinners in Keen’s days, and Emerson came to count on her to run the show. The Habitat program has special meaning for Gerock, because a house was built in her late husband Charles’ honor about 15 years ago.

Flora Sorocki lives in that particular house today, and she offers Bible study in her home and does a lot to look after children in her neighborhood off Celebration Drive.

Gerock said she and other volunteers from Trading Ford Baptist are just “trying to honor God in everything we do.”

Emerson said the barbecue chicken fundraiser reflects Habitat for Humanity’s mission as a ministry. It represents people in action showing love for their fellow man — “and having fun doing it,” he said.

One of the volunteers scraped a knuckle Monday morning, and he was immediately sent to Gerock for attention. Without missing a beat, she pulled a plastic bag out of her pocket that was full of Band-Aids and handed him one.

“I tell you, I’ve been around here awhile,” she said.