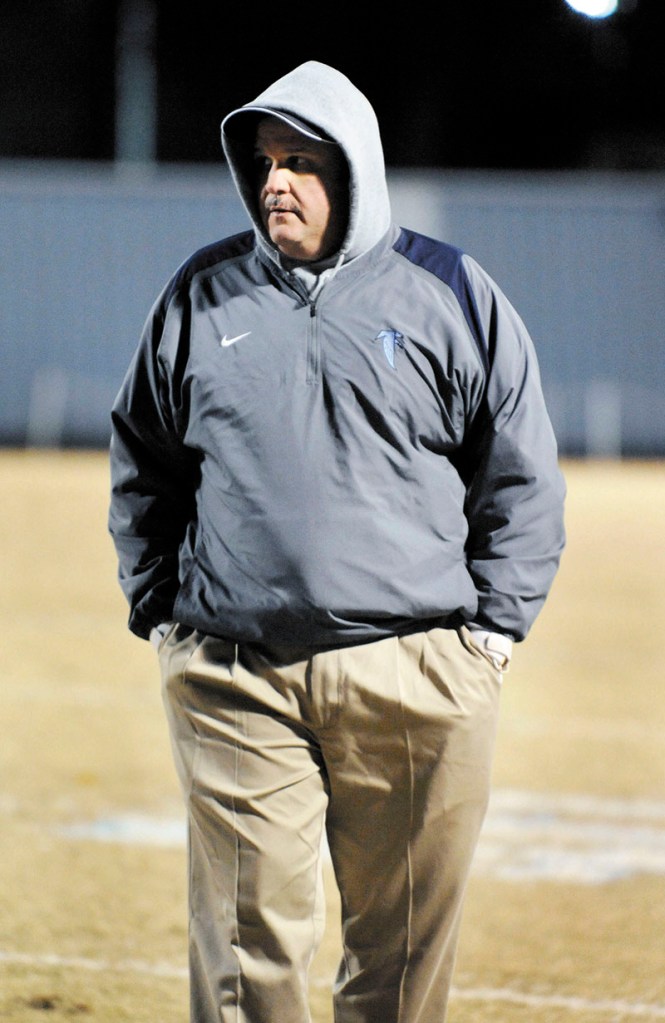 File photo by Wayne Hinshaw/The Salisbury Post West Rowan's Scott Young walks the sidelines in November 2014 on the night the Falcons defeated North Buncombe in the first round of the 3A state playoffs. Young had heart surgery Tuesday to place a device in his chest that will help his heart pump blood to vital organs. He is on the list to receive a heart transplant.

West Rowan head coach Scott Young underwent open heart surgery Tuesday to address health issues that have plagued the coach since the end of the 2014 season.

Carolina Preps reported Young had surgery to implant a ventricular assist device in his chest during a procedure that started shortly after noon.

Dianne Young, Scott Young’s wife, said in a text message to the Post, “Scott came through surgery okay & did well. He is resting peacefully.”

The device moves blood to the vital organs in the body from the lower chamber of the heart.

The VAD is a short-term solution to a much larger problem. Since the end of the 2014 season, Young sought treatment at hospitals around the state to help a malfunctioning heart. He is already on the list to receive a heart transplant, but it is unknown how long it will be before he gets a new one.

This is not Young’s first heart problem.

He was having chest pains in the early morning of Oct. 25, 2011, and drove himself to the hospital. It turned out he was in the middle of cardiac arrest. Young recovered quickly and was in the press box at West Iredell three days afterward helping Joe Nixon, now the head coach at North Rowan, and Gary Hunt coach the Falcons to a win over the Warriors to seal the North Piedmont Conference championship for the eighth straight year.

Chris Hughes, a former South Rowan coach and the founder of the Carolina Preps website, has set up a fundraiser on GoFundMe.com. Hughes said 100 percent of the proceeds will go to Young and his family. The goal is to raise $50,000.

As of 8 p.m. Tuesday, there were already $6,945 in donations. Among those contributing were Carson coach Joe Pinyan and Mooresville head coach Hal Capps. Pinyan said being a high school football coach is being a part of a brotherhood.

“I think if all football coaches were to donate even $5 or $10, every little bit is going to help,” said Pinyan, who coached Young at East Rowan in the 1980s. “If any coach were in the same boat, they would appreciate the gift.

Donations have come in from across the state, including from coaches down east.

“It seems a lot of people care about the coach, and that’s refreshing to see,” Hughes said.