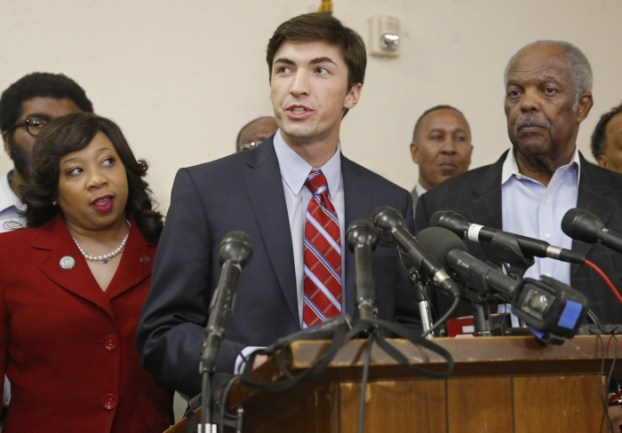 On the road to forgiveness after racial chant?

Levi Pettit could have kept quiet and hoped that the controversy would eventually go away. He could have just issued a carefully lawyered apology that lacked heart and remorse.

Oklahoma state Sen. Anastasia Pittman easily could have rebuffed Pettit’s request to discuss his role in leading an ugly racist chant caught on video with other Sigma Alpha Epsilon fraternity members. Instead, she saw an opportunity for progress and redemption.

As wrong and immature as Pettit was on that bus, the 20-year-old former University of Oklahoma student demonstrated remarkable maturity and remorse in seeking public forgiveness at a news conference last week. With black clergy and civic leaders by his side in an African-American Baptist church in Oklahoma City, he apologized for his actions in introspective language that gave the impression of a truly humbled person.

“There are no excuses for my behavior,” he said. “I never thought of myself as a racist. I never considered it a possibility. But the bottom line is that the words that were said in that chant were mean, hateful and racist.”

The young man standing before a crowd of people he had slurred looked like a much different young man than the one swaying and singing on that bus. He looked both shaken and grateful.

It is Pittman to whom he most owes his gratitude. Before Pettit apologized publicly, Pittman had spoken to him. He wasn’t a racist, she concluded, but someone who made a terrible mistake. She extended to him the opportunity to make right on his mistake.

We need people like Pittman in our lives — people who will extend to us forgiveness and remind us of the possibility of redeeming ourselves.

Pettit did nothing to earn the chance Pittman gave him Wednesday. His earning is ahead of him now. He has a debt. He seems to understand that. But it’s a debt he can pay, thanks to a woman he didn’t know, who few of us knew, but whom we should thank today.

Internet rules are power grab by government While you were sleeping, the FCC voted three to two to take over... read more