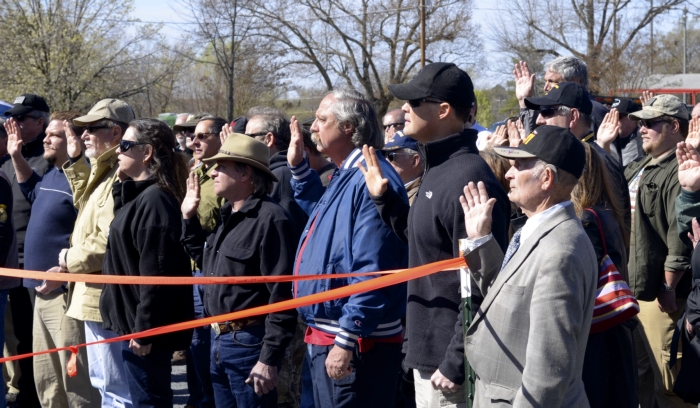 FAITH – Members and supporters of Oath Keepers rallied in Rowan County on Sunday in favor of Constitutional rights, and against what many see as a federal government that is too big and oppressive.

The core message of the rally was a call for citizens to defend the U.S. Constitution, especially by electing local leaders who are committed to the principle of limited government.

Organizers said about 200 people attended some or all of the four-hour rally, which featured seven guest speakers.

The rally concluded with citizens taking or reaffirming an oath “to support and defend the Constitution against all enemies, foreign and domestic.”

T-shirts and vests, along with a signs promoting Biblical teachings and Second Amendment rights, showed the conservative nature of many in the audience.

But Anthony Huss, of Lincoln County, said he drove to Faith for the rally because he wanted to hear the speakers and meet like-minded people.

“I cringe at any kind of political affiliation,” Huss said. “It acts as a rubber stamp, an easy label. It’s an easy way to not think.”

Rick Johnson, Oath Keepers organizer, said the goal of this first-time event was to bring in speakers who are “passionate about the Constitution” and who are in high demand.

“We’re very fortunate to live in a country where we can express our views and not expect retribution from the government,” Johnson said.

Among the speakers was KrisAnne Hall, an author, attorney and former prosecutor whose website and blog describe her transformation from a Democrat to a “Constitutionalist” who believes that government power should be strictly controlled.

From the stage in American Legion park, Hall spoke passionately about opposing what she called “oppressive” behavior on the part of policymakers in Washington, D.C.

“The feds don’t have the manpower or the resources to enforce their tyrannical laws and regulations,” Hall said.

By electing “Constitution-minded” men and women, Hall said, residents can bring about reform at the local level that carries over to the state and federal governments.

Richard Mack, a former Arizona sheriff and outspoken opponent of federal policy, reminded listeners that Congress, not the president or the Supreme Court, has power to make laws.

However, Mack said, “our Constitution will not be restored in Washington, D.C. … I think the track record is pretty clear on that.”

Mack suggested county sheriffs have the power to stand against federal agencies such as the IRS and the Forest Service, which he described in examples.

And Mack said states were too quick to accept federal funding in exchange for policy changes such as Common Core.

“What is the federal government buying?” Mack said. “They’re buying what anybody else buys with a bribe — friendship, support and loyalty.”

The Oath Keepers movement has drawn criticism on a national level, especially for members’ outspoken opposition to what they see as unconstitutional actions by government.

Mack has been accused of supporting anti-government “militia” groups, according to media reports.

According to bylaws on the Oath Keepers’ website, anyone who “advocates the overthrow of the government of the United States or the violation of the Constitution thereof” is prohibited from becoming a member.

Oath Keepers members were also criticized for traveling to Ferguson, Mo., to guard local businesses in the aftermath of racially-charged riots last year.

In media reports, some characterized the Oath Keepers in Ferguson as “vigilantes” and others praised them for protecting property owners.

As Mack called on audience members to come forward and take an oath to protect the Constitution, he said he understood that not everyone would do so.

The majority of those in the audience came forward, raised their right hands and repeated the oath in front of the stage.

Among them was Rebekkah Davidson, of Salisbury. Wearing an Oath Keepers t-shirt and holding a bag of books purchased after the event, Davidson said she wanted to focus on “making sure local government officials are doing their job and following the Constitution.”

Not only that, but her fiancé is currently serving in the U.S. military in Afghanistan, Davidson said, having sworn his own oath to defend the Constitution.

“I figured if my fiancé is willing to die for his country, then I can do something here at home,” Davidson said.