Howard Platt is back on the air with Salisbury Radio 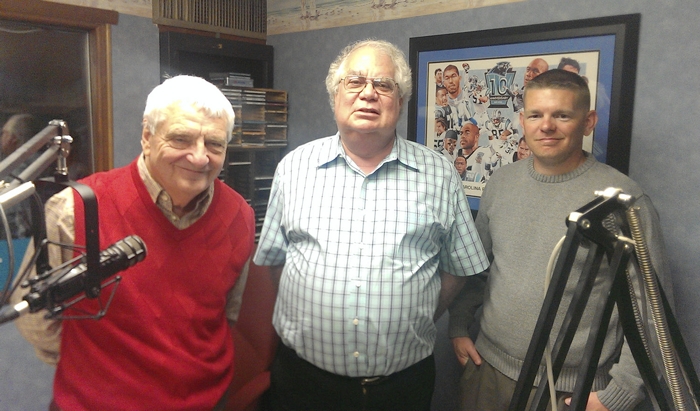 Submitted photo From left, Buddy Poole, Howard Platt and Lance Poole, who will be broadcasting together on the new format of Salisbury Radio, which includes WSTP and WSAT.

Howard Platt returns to the airwaves in Salisbury April 1, Salisbury Radio, which includes WSAT 1280 and WSTP 1490, announced Tuesday. And if local listeners like that news, Poole says they should tune in to WSTP to hear it launch its new format later this week.

The two AM stations that are now Salisbury Radio were recently purchased by 2B Production on behalf of the Catawba Foundation. The stations will be pooling their resources to bring Salisbury and Rowan County listeners the very best in local radio. The stations will also be used as a real world training ground for students at Catawba College. Former WSAT general manager and morning show host Buddy Poole is now general manager of both WSAT and WSTP, overseeing their joint operations.

Platt will be broadcasting from the WSAT studios on Jake Alexander Boulevard, which is now also home to WSTP. Platt brings his 43 years of radio experience with him. When one adds Platt’s years of experience to that of Buddy (51 years) and Lance (29 years) Poole’s, there are 120 years of radio expertise brought to bear on the local market.

According to Lance Poole, Platt will be doing sports and some news on both stations. Platt and the stations’ general manager, Buddy Poole, will be broadcasting American Legion Baseball together on WSAT, rather than as the competitors they have been in the past who called Legion games on separate local stations. Platt will also broadcast high school sports.

“This year, it will be American Legion Baseball on WSAT,” Poole said. “This will provide our listeners with a stronger signal and better coverage of these games. The listeners will no longer have to switch back and forth between stations for Legion ball.”

Platt, a 1973 alumnus of UNC Chapel Hill, started in radio in 1972 and began calling Salisbury High School football games in 1978 on WSTP.

Salisbury Radio announced earlier this month that WBTV morning meteorologist Al Conklin will be WSTP’s weather man for Salisbury and Rowan County, effective April 1. The license to operate WSTP 1490 was transferred on March 10 from Tim Coates and Rowan Media to 2B Productions.