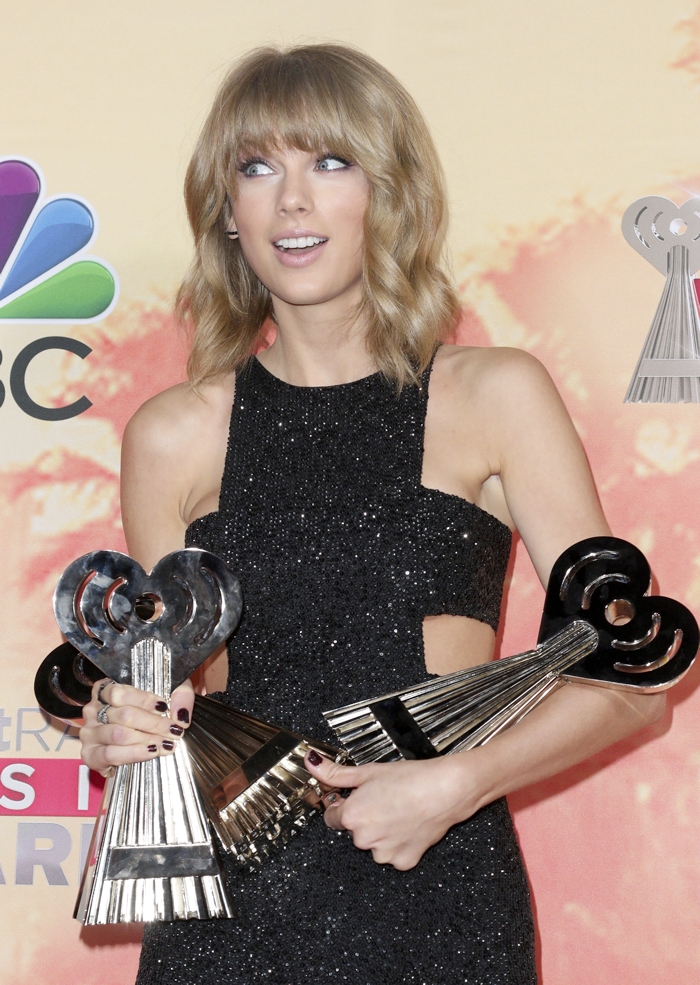 Taylor Swift poses in the press room with the awards for best lyrics for Blank Space, song of the year for Shake It Off and artist of the year at the iHeartRadio Music Awards at The Shrine Auditorium on Sunday, March 29, 2015, in Los Angeles. (Photo by John Salangsang/Invision/AP)

1. IRAN NUCLEAR TALKS DOWN TO WIRE

Differences still remain less than two days before a deadline for the outline of an agreement that would curb Tehran’s atomic activities.

2. WHAT FEDS MAY DO TO PROTECT INVESTORS

AP’s Bernard Condon says the White House is backing tougher standards for brokers at a time when more Americans are relying on them for retirement planning.

Ehud Olmert was found guilty in a retrial of corruption charges, the latest chapter in the downfall of a man who had hoped to achieve peace with the Palestinians.

AP’s Lauran Neergaard finds some hospitals manage to help critically ill patients stand or walk even though they are on life support, exercise that may speed recovery.

Petra is a big tourist draw, yet nearby hotels stand virtually empty and business is at a standstill because of the kingdom’s role in the battle against Islamic State militants.

Three women named Emma — a 12-year-old, her mother and her grandmother — were from an affluent family known for their love of sports in a beautiful Barcelona suburb.

7. LOOK AT WHAT’S MAKING A COMEBACK

Mothballed by Ford last decade, the Lincoln Continental is back, a nod to the car’s improved sales in the U.S. and an appetite for luxury brands in China.

The Edward M. Kennedy Institute for the United States Senate will be opening to the public, featuring a replica of the chamber where Kennedy served for 47 years.

9. JUST CALL THEM THE IHEARTTAYLORSWIFT AWARDS

The pop singer cleaned house at the iHeartRadio Music Awards, winning artist of the year and song of the year for “Shake It Off.”

Michigan State will face Duke and undefeated Kentucky will meet Wisconsin as three No. 1 seeds survive to the NCAA Tournament’s championship weekend.