What rhymes with orange? Spring fashion! 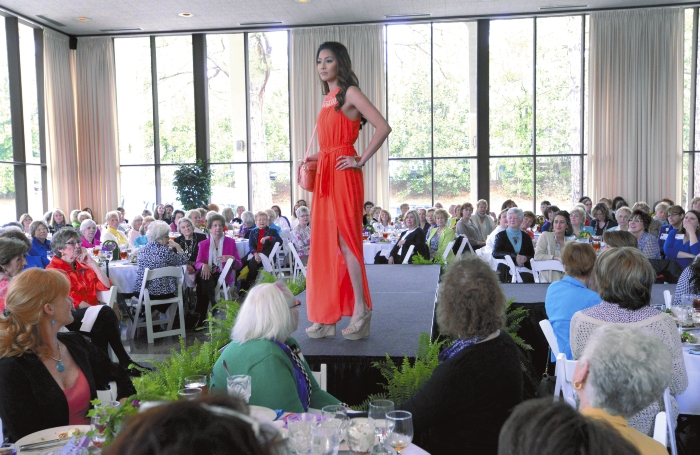 Julie Nguyen models an outfit from AnnaCraig Boutique. Photo by Wayne Hinshaw, for the Salisbury Post

Orange is definitely the color this season, and orange was everywhere Wednesday during Fashions for a Cause in Catawba College’s Crystal Lounge. The highly anticipated event, now in its 17th year, had been sold out for weeks. Sponsored by the Rowan Medical Society Alliance Foundation, proceeds benefit the Community Care Clinic.

As always, emcee David Whisenant presided at the podium, displaying his trademark panache, conceding there were a lot of words on those little white cards he didn’t know. Nevertheless, he gave it all he had.

“I do it because I believe in the cause of the Community Care Clinic,” said Whisenant, Salisbury bureau chief for WBTV Channel 3, who was nattily attired in a gray morning suit.

His partner-in-crime, Dr. Joel Goodwin, donned his usual black tuxedo, assisting models on and off the stage. This year, Goodwin added a snappy turquoise vest with matching plaid bowtie and pocket square.

The debut of orange for spring 2015 was often paired with white — capri pants or skinny jeans. (Yeah ladies, those skinny jeans are back, whether you like it or not.)

Showing off casual fashions were models from Stitchin’ Post Gifts, AnnaCraig Boutique, Caniche and Adella, all in Downtown Salisbury, along with Cato on Freeland Drive. Casual and more dressy fashions came from Belk at Wallace Commons and Anne’s Dress Shop of Concord. Maia’s and A Perfect Dress showcased prom and evening wear.

Male models snagged their share of applause with varied attire from the Thread Shed. Sheriff Kevin Auten showed off his 100-plus pound weight loss, modeling his dress uniform jacket — now way too big — then gleefully slipping out of it to reveal his svelte physique. Also garnering applause in their handsome uniforms were his emergency services colleagues, Police Chief Rory Collins and Fire Chief Bob Parnell.

A Perfect Dress in China Grove has become a destination over the years for bridal and prom attire. Model Elle Wimmer wore a “Frozen” inspired prom dress in a delicate ice blue chiffon with a bodice encrusted with aurora rhinestones, beads and gems. Gigi Anemone and Mary Scott Norris modeled a two-piece Tiffany prom dress in royal and a red beaded dress with statement back, respectively, for Maia’s Fashions in Downtown Salisbury.

Of course, the littlest models are always sure to please, and those in this year’s show were no exception.

Clara Misner was a quick-change gal, modeling three different outfits in quick succession. The more times she hit the runway, the more animated the 3-year-old became.

“She has found her groove,” Whisenant noted.

Elected officials even took a turn on the runway. County Commissioner Judy Klusman modeled fashions from Belk, as did City Councilwoman Karen Alexander.

Longtime trend-watchers will note that navy — a classic spring color — is back in a big way this season. Taylor Rogers wore a form-fitting navy dress from Caniche, and Allison Ogden paired a black chiffon top with white jeans for another timeless spring combination, also from Caniche.

Lace also makes its annual appearance this season, and Karen Alexander wore a white lace dress from Belk. Leah Campion had the long legs to rock a pair of short, lace-overlay shorts, as well as a mini-dress, both from Belk. Most women, however, would probably add leggings to many of the super-short dresses seen in Wednesday’s show.

Whisenant said of Thomas’ skirt, “It’s good for your circulation.”

Hannah Cook modeled a fantastic maxi dress from Anne’s in hot pink and lime, which the narrative said covered a “multitude of sins.”

Whisenant admitted he had no idea what that term meant, although all the women in the room nodded knowingly.

Sisters Jacqueline and Diana Grace Steenwyk were the picture of springtime elegance in coordinating pink Easter dresses from Maia’s. Jacqueline’s linen dress even came with a darling matching coat.

Judy Barnhardt wore the ever-popular LBD (little black dress) from the Stitchin’ Post, but her zebra patterned shoes served to kick things up a notch. Karen Alexander did the same with red pumps to compliment a black and cream suit from Belk.

Patterson wore another kimono from Cato, this time an orange cardigan paired with a navy pleated dress.

Models from Adella showed off black and white dresses in a variety of styles, while another wore a handkerchief-style print jumper from the same collection.

Maria Weber wore a lovely baby blue gown in a shade called “waterfall,” a must-have color this season for weddings and other special occasions. Nancy Vick modeled an espresso mother-of-the-bride dress. These fashions were all from Maia’s.

Mary Donohue celebrated her upcoming wedding by wearing an ivory chiffon gown from A Perfect Dress. Its heavily beaded neckline reminded her of Cleopatra, and was a real showstopper.

Dr. Jennifer Hudson wore a navy chiffon dress from A Perfect Dress, again demonstrating that navy is the new black for spring.

Tracy McMillin provided the traditional ending to the show, modeling an ivory lace and tulle wedding gown from A Perfect Dress.