Optimistic Futurist: As change speeds up, how will downtown look? 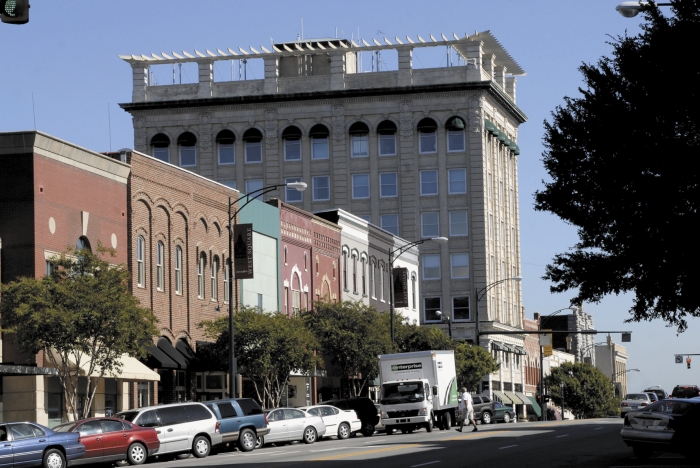 For many years, 14 smaller “mom and pop” stores died each time Wal-Mart, Target and Kmart opened a new store.

While this was going on, one out of every two United States manufacturing jobs vanished, either overseas or due to automation or both. This was a double whammy, because each highly paid local worker circulated enough money throughout the local economy to “trickle down” another 4.6 local jobs. When the manufacturing jobs vanished, so did the many of the other 4.6 local jobs.

All across North Carolina, groups are meeting to plan next steps in re-creating downtowns. In many cases, they will be tripped up by something they are not looking for — and do not see.

So around the planning table the word “manufacturing” will be used, and many people will have a mental picture of their dad on a factory shop floor holding a tool — not an office worker programming a 3D printer.

Or if one thinks about jobs in food production, bucolic images of red barns pop into mind — not indoor fish farms or hydroponic lettuce grown in currently abandoned factories, delivered by electric cars.

The world outside is changing faster than we recognize. The Internet as we know it started to be widely used just 20 years ago. The first smartphone was introduced just over 20 years ago; today the United States has more cellphones than citizens.

In the breadbasket of America, the worst drought in 1,000 years is already underway and beginning to disrupt food supplies. The cost of beef has doubled since 2009.

Renewable energy prices (down 50 percent since 2010) are predicted by Deutsche Bank to be competitive with all historic sources by 2017, resulting in much more locally built and maintained renewable energy.

In 20 years, our population will grow 20 percent. The number of us over 65 will be almost double what it is today, and four in 10 of those will need long-term care for two or more years. The number of 85-year-olds will triple.

Since around a third of all lifetime healthcare costs are spent in the last six months of life, there will be a massive need for expanded healthcare for the elderly, located close to home.

Household size, which was 3 people living under one roof in 1960, now sits at 2.5 and is anticipated to be around 2.

We can say with some certainty 20 years from now we will see vastly more interconnected electronic devices, individualized medicine instead of “one size fits all” pills, more medical care delivered at the pharmacy, education delivered to individual students electronically, and more neighbors who speak English as a second language.

Fewer people will own cars, instead using rent-by-the-hour cars picked up at some parking spot identified by a cellphone search. Industry is planning on introducing driverless cars. Many more people will work multiple part-time jobs from home. More people will commute by high speed rail built along existing train lines.

Most of this change is already surfacing, but it is not integrated into community planning for the future.

We can see that downtowns should have elevator-equipped small apartments with walkable access to life’s basic needs like groceries and pharmacy. Many of these can be located above stores. All buildings (including those spec built to spur economic development) should be built to be energy efficient and “renewable ready.”

Medical care should be close by, not near the large hospital miles away. Broadband should be everywhere, and cheap.

A good local example is Birkdale Village, just 20 minutes away on Route 73.

If we do not anticipate this future, there is great risk that our creatively designed basketball will miss the rapidly moving hoop.

To see the sources of facts used in this article, and learn of other successful money and life saving programs that can be implemented locally to create a better future for our country, go to www.TheOptimisticFuturist.org