Mayhew managed to quiet inner critic so she could write 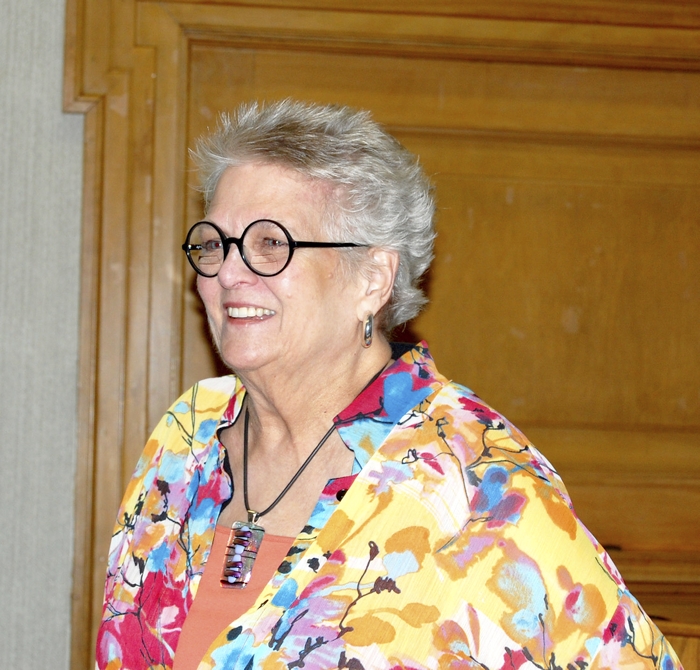 Deirdre Parker Smith/Salisbury Post Anna Jean Mayhew meets fans at the 2nd annual Rowan Reading Rendezvous held March 21 at Rowan Public Library. She is the author of 'The Dry Grass of August' and is working on a new novel.

“The Dry Grass of August,” published in 2011, presented the dire consequences of racism, seen through the eyes of a 13-year-old.

Its author, Anna Jean Mayhew, wrote it to expose the absurdity of racism, something she’s sorry to say still exists.

Speaking at the 2015 Rowan Reading Rendezvous, Mayhew told of her struggle with her loud inner critic — the one that wouldn’t let her write at first.

She grew up seeing every comment as criticism, and she had to learn to trust her process and let go of the results. She’s now working on a second novel, part of her original book deal.

“You always hear it’s never too late, well, lately that gives me too much lag time. … You’ve got to keep writing one word at a time. You suit up, show up, write one sentence at a time.”

You also have to allow yourself to write poorly. “Perfectionism is the voice of the oppressor,” she said.

Her book has done well, and is now in its 11th printing. There are reading guides and study guides that go with it now, too, and it’s being taught in some schools.

Mayhew told a story of walking into Costco and seeing “The Dry Grass of August,” for sale at much less than she could get it from her publisher. So she bought 15 copies. The cashier said, “That must be a pretty good book.” Mayhew said she hoped it was, since she was the author. “No way,” the cashier said. Mayhew assured her it was true and it turned into a gathering of interested readers.

Mayhew grew up in Charlotte and lived there most of her life. She writes from her life, from the black and white, male and female people she has known. The same themes show up again and again.

It took her 18 years to finish her first novel. She’s part of a writers group in Chapel Hill, where she now lives with her Swiss-French husband. “Find a group that’s better than you are,” she advised.

She admits she suffered doubts that “stopped me cold.” What she has now are not blocks, but fallow periods, and she’s learned to accept those. She composes a while, digests a while, lets it cool, works on something else.

She quoted Flannery O’Connor, who said writing was a terrible experience. It makes your hair fall out and your teeth decay. Writing fiction is a plunge into reality that’s a shock to the system.

Mayhew never had time for college, but after she divorced, she took a creative writing course at Central Piedmont Community College. She was hoping to meet a sensitive, artistic man, and she did. He and his wife are among her best friends. He is her first reader.

She was an adviser to teenagers in her Unitarian church and wrote three plays for them. She had poems and short stories published, then she opened her own court reporting agency where she took testimony from a wide variety of people. She worked at Charlotte Opera and learned about plot, setting and character.

“Steal Away Home” was the working title of the book, but there were other books with the same name. She thought of Walt Whitman’s “Leaves of Grass” for inspiration. Then she looked at the Bible, the Revised Standard Version, and found the phrase that would inspire the title in Isaiah 5:24, “Therefore, as the tongue of fire devours the stubble, and as dry grass sinks down in the flame, so their root will be as rottenness, and their blossom go up like dust.”

Her next novel, titled “Tomorrow’s Bread,” inspired by a Langston Hughes poem, will be about how urban renewal destroyed historically black neighborhoods.

The character of Mary in “Dry Grass of August,” Mayhew said, is based on the Mary who worked for her family, but she said she had to let go of the Mary she knew to create the Mary of the book. And it took a move to Chapel Hill to make her want to write about Charlotte.

She knew her somewhat critical mother would not like her first novel, which involved some family stories, In fact, her mother told her, “I hope I’m dead before you publish this.” Mayhew pointed out it was fiction, but her mother would have none of that. Her mother died in 2004, and Mayhew now thinks she wold have appreciated the book, given time.

“I lived a life of privilege,” Mayhew said. “Even though we had tough times. We were never homeless. … I’m not sure why I write about the disadvantaged.”

Responding to a question about how she gets into a scene, Mayhew said she always writes her characters first. “I trust the characters now, though I didn’t at first. I listen to them tell me the stories.” She cannot outline before writing, it stops her cold.

Mayhew’s timing was a little off. While her book was making the rounds, “The Help” was published and became a huge success. “The Dry Grass of August” was different, more disturbing, but it finally found a home.

“I had no expectation so many people would read it.”

And so she still writes one word after another, trying to make that critical voice silent forever.