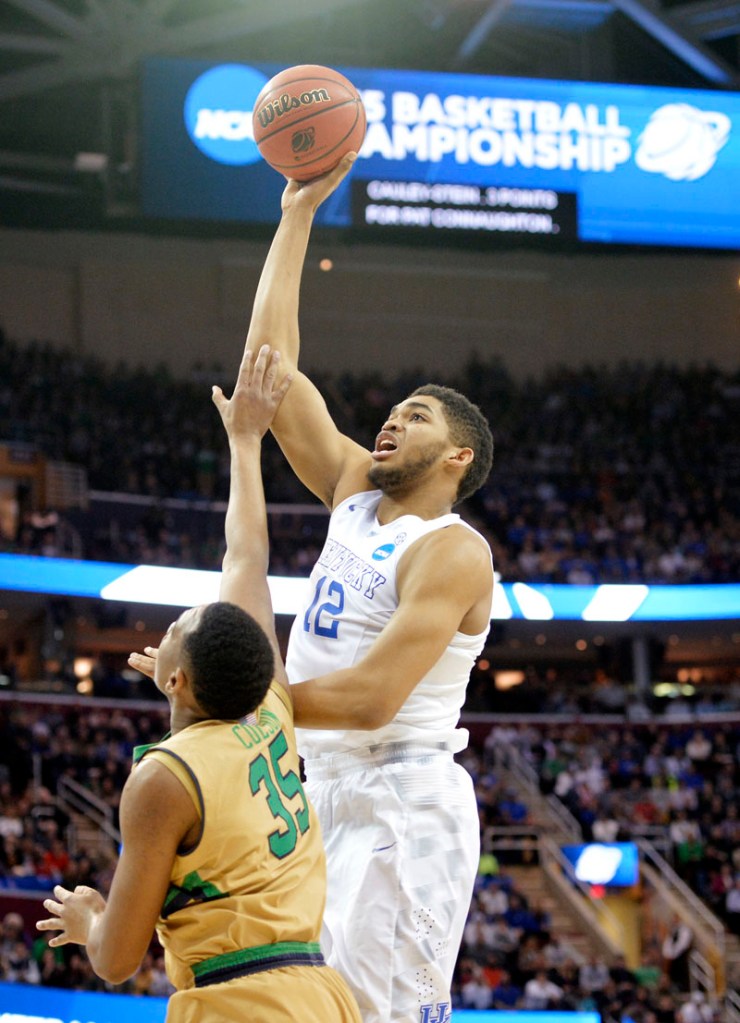 Kentucky's Karl-Anthony Towns (12) shoots over Notre Dame's Bonzie Colson (35) in the first half of a college basketball game in the NCAA men's tournament regional finals, Saturday, March 28, 2015, in Cleveland.

Andrew Harrison made two free throws with six seconds remaining, and the top-seeded Wildcats kept their unbeaten season and national title hopes intact with a 68-66 win over Notre Dame on Saturday night in the Midwest Regional final.

The Wildcats (38-0) advanced to the Final Four in Indianapolis next week, where they will meet Wisconsin.

It took everything Kentucky had to hold off the Fighting Irish (32-6), who came within seconds of shocking the tournament’s overwhelming favorite. Notre Dame, which has a history of stunning upsets in football and basketball, wasn’t done until Jerian Grant’s double-clutch 3-pointer from the left corner was long.

Kentucky’s bench stormed the floor and the Wildcats, who only had one other two-point game this season and won the semifinal by 39, celebrated knowing they had ducked a major challenge and are now just two wins from becoming the first team to go undefeated since Indiana in 1976.

“We didn’t play very well and Notre Dame, I thought, controlled the whole thing, but we made the plays,” Kentucky coach John Calipari said. “We figured out a way to win it. We’re just saying one more game, play our best. We’ve had other tests, but we have a will to win.”

Karl-Anthony Towns scored 25 to lead Kentucky, which trailed for most of the second half.

Zach Auguste scored 20, Steve Vasturia 16 and Grant 15 for the third-seeded Fighting Irish, playing in their first regional final in 36 years.

There was no doubt Notre Dame belonged. The ACC tournament champions controlled the tempo and weren’t intimated by the Wildcats and their collection of high school All-Americans and soon-to-be NBA millionaires.

Calipari insisted on Friday his team was not perfect, only unbeaten and that any team left in the tournament was capable of toppling the top Cats.

Notre Dame was right there.

“It’s tough,” said Grant, who returned to Notre Dame this season after being dismissed for academics. “Just to be so close to making history, from doing something so special and just like that it’s over. We felt we played well enough to win.”

Following a brief award ceremony, Kentucky’s players cut down the nets as Prince’s “Party Like It’s 1999” blared through the speakers inside Quicken Loans Arena, which rocked for more than two hours as Notre Dame and Kentucky traded baskets. The game featured 20 lead changes and 12 ties.

Down six with 5:22 left after Auguste’s three-point play, Kentucky roared back and took a 64-63 lead on Aaron Harrison’s 3-pointer with 3:14 left. The sophomore, who hit two big last-second shots in last year’s tournament to get Kentucky to the title game, stared into the crowd of delirious Wildcats fans, including actress Ashely Judd, who spent most of the night jumping out of her seat.

Notre Dame’s Grant responded with a 3 to put the Irish ahead 66-64, but the Wildcats again went inside to the 6-foot-11 Towns, who was unstoppable in the second half and backed down Auguste to drop in another layup.

The Fighting Irish ran as much clock out as possible, but Grant had his shot blocked by Willie Cauley-Stein and the ball went back to Kentucky on a 35-second violation. Kentucky then put the ball in Andrew Harrison’s hands and he drew a foul before knocking down his free throws.

Grant pushed the ball up, but with several Kentucky players in his face, his last-second heave was way off.

“We had them where we wanted,” Auguste said afterward.

The Fighting Irish needed a strong start to build confidence, and they got it.

With a fan holding as sign that said: “Miracles Happen,” Notre Dame didn’t shy away from driving the ball at Kentucky’s front line in the first half, getting several put-back dunks.

Notre Dame coach Mike Brey felt his players would have the nation’s support, believing the Fighting Irish would be adopted by the nation and take the floor as “America’s team” against the Wildcats.

For a long stretch of the second half it appeared the Fighting Irish would add another upset to their roster of stunners, none bigger than ending UCLA’s 88-game winning streak in 1974.

But this Kentucky team wouldn’t have it, and are now on history’s doorstep.

Notre Dame: The last time the Fighting Irish played in a regional final (March 18, 1979) they lost to eventual national champion Michigan State, led by Magic Johnson. … Grant is the only player in school history with at least 1,700 points, 600 assists, 150 steals and 30 blocks.

Kentucky: The Wildcats have made a 3-pointer in 938 consecutive games, the nation’s second-longest streak. UNLV has dropped a 3 in 941 straight.