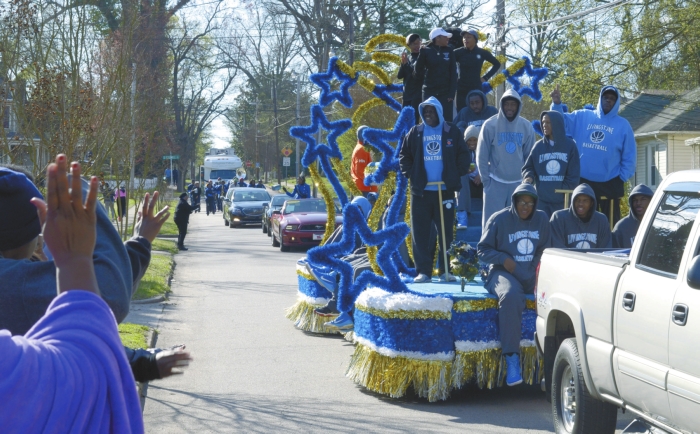 SALISBURY – The clear blue sky and spring flowers seemed out of place with the cold wind Saturday morning at Livingstone College.

But although some of them watched from their cars, spectators turned out Saturday along Monroe Street and elsewhere to honor the Livingstone College Blue Bears for their second straight CIAA men’s basketball championship.

On Feb. 28, the Blue Bears knocked off Winston-Salem State University to win their second straight CIAA title, with a score of 106-91.

But they fell in the NCAA Regional Championship to the West Liberty Hilltoppers on March 14.

With that loss behind them, Saturday was a time to celebrate.

With the marching band playing, and school staff and dignitaries waving to the crowd, the men’s basketball team rode a parade float onto campus.

A youth group from York Memorial AME Zion Church in Greenville waved as the Blue Bears rolled past.

Livingstone College is supported by the AME Zion Church, and youth leader Mary House said that, for her and the youth, “this is our college.”

After the parade and ceremony, the youth were slated to take a tour of the college.

“It’s glorious,” said Tyshaun Tyson, a sixth-grader in the youth group. “It’s great to be able to see the Livingstone campus.”

On the front lawn of the campus, a small crowd of students, faculty, alumni and guests gathered.

“We’re proud of you and your accomplishments over the last couple of years,” Edds told students and staff. “We cheer when you cheer, we mourn when you mourn.”

“And we shiver when you shiver!” Edds added a moment later, as a cold wind blew across the lawn, fluttering papers.

Livingstone College President Jimmy R. Jenkins, Sr. told the Post that the parade was an opportunity to bring pride not only to the campus, but to the West End community where Livingstone is located.

“It really is something that shows the community’s appreciation for what these young men have achieved,” Jenkins said.

In his remarks to the team and to Head Coach James Stinson, Jenkins praised the team for their hard fight throughout the season, and for what he called “a history-making two straight CIAA championships.”

Asked how he felt to see his team and himself honored, Stinson said, “It’s a pretty good feeling. We’re truly blessed to have this opportunity.”

In his remarks to the team during the ceremony, Stinson praised his team for their attitudes and actions on and off the court.

One of the seniors on this year’s team, Eric Mayo, said the second CIAA victory in his final year “was an amazing feeling.”

Cornelius Johnson, who played center, is another senior. Johnson said he’s graduating with a degree in computer information systems.

“Coach Stinson provided me a chance to play. He taught me lifelong lessons,” Johnson said.

“I’m a better man for being on this team for four years,” Johnson said.