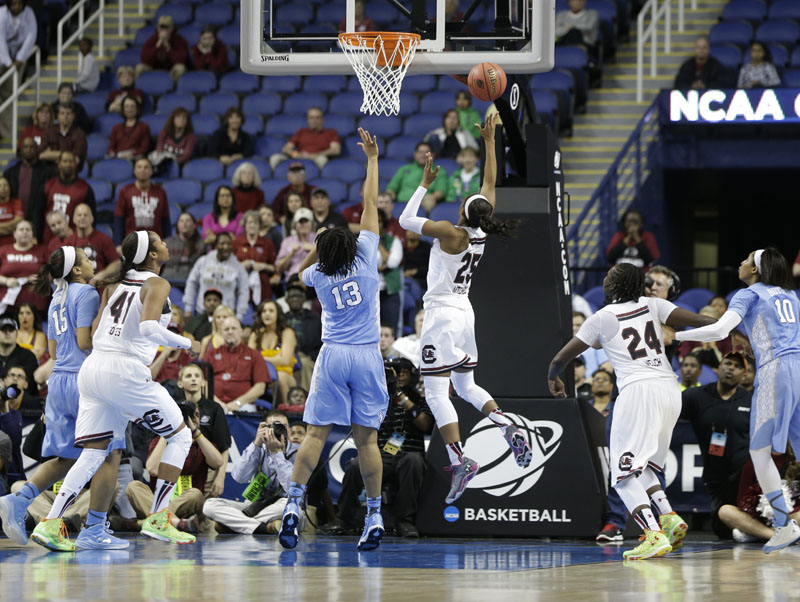 The Associated Press South Carolina's Tiffany Mitchell (25) shoots the game-winning shot over North Carolina's Hillary Fuller (13) in the second half Friday in the NCAA Tournament in Greensboro. South Carolina won 67-65.

GREENSBORO, N.C. (AP) — Tiffany Mitchell drove to the basket and scored with 4.2 seconds left and South Carolina edged North Carolina 67-65 on Friday night in the NCAA Tournament’s round of 16.

Mitchell finished with 18 points for the No. 1-seeded Gamecocks (33-2), who had to fight the entire way to push past UNC in a rematch of last year’s Sweet 16 game and advance to the Greensboro Region final.

Alaina Coates also scored 18 points, including two key free throws for the lead with 46.1 seconds to go. Then Mitchell, the Southeastern Conference player of the year, answered a tying basket from Jessica Washington in the final minute by driving past Brittany Rountree for what turned out to be the winning score.

Fourth-seeded UNC (26-9) had one more chance, but freshman Jamie Cherry’s desperation runner hit all backboard as the horn sounded, sending the Gamecocks into an oncourt celebration.

South Carolina had reached the Elite Eight only once before, losing to Duke in 2002. Now Dawn Staley’s Gamecocks are back to face the Arizona State-Florida State winner on Sunday to go to the Final Four.

Latifah Coleman scored 10 of her 15 after halftime for North Carolina, which led 63-60 with about 90 seconds left but couldn’t quite close out the Gamecocks.

The teams met in nearly this exact situation last year, though on the opposite coast at Stanford. The Gamecocks entered as a No. 1 seed while the Tar Heels were a No. 4 then, too, but UNC won 65-58.