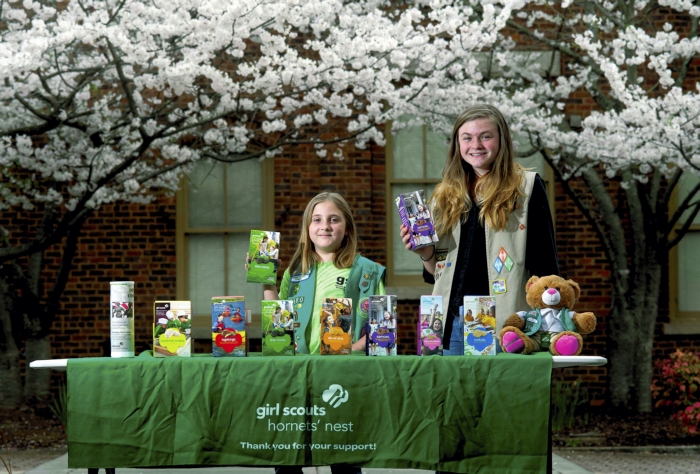 JON C. LAKEY / SALISBURY POST Girl Scouts Rachel Judd (left) and Bailey Walker have each sold 3,500 boxes of cookies for their Rockwell troop. Picking high volume traffic locations and the ability to accept payment via debit card readers were some of the reasons for their success. Thursday, March 26, 2015, in Salisbury, N.C.

SALISBURY — Rachel Judd and Bailey Walker are whirling dervishes. They pace and prance and jab at each other like sisters.

Rachel likes to ride horses. Bailey participates on her middle school soccer team, plays in the band and does a lot with her church youth group.

Together, the girls attend karate classes and, oh, yeah, they are Girl Scouts who took the task of selling Girl Scout cookies quite seriously this year.

Making a pact that they would tie no matter what, each of the girls sold 3,500 boxes of cookies, breaking the previous record in the Hornets’ Nest Council of 3,378 boxes.

They often put in 20-hour weekends, selling their cookies from tables and booths at Walmart and Sam’s Club locations and malls in the greater Charlotte region. Closer to home, you might have seen the girls at the Salisbury Walmart, Lowe’s, Old Navy or Sweet Frog.

Their pre-sale strategies starting in mid December also paid off at some Salisbury car dealerships.

“Both of them easily put in 100 hours,” said Bailey’s mother, Stephenie Walker.

The girls’ relied on pretty simple sales techniques, with a focus on courtesy,  From behind their tables, they made sure to stand, just out of common respect for people, and they made it a point not to be eating when they were selling.

Bailey usually tried to add the line, “Thank you for supporting Girl Scouts.”

Their secret weapon, especially at malls, proved to be a credit car reader attached to one of their parents’ cellphones.

When an undecided customer would ask, ‘Do you take credit cards?” — thinking the Girl Scouts probably could not handle that form of payment — Judd and Walker would answer brightly, “Yes, we do.”

A lot of buyers reacted with a “Wow” when they heard that, Bailey said.

The girls are members of a combined troop (Nos. 1680 and 2370), which consists of eight girls and meets at the VFW in Rockwell. The troop as a whole has sold about 10,200 boxes of cookies, which is significant when you consider the troop will receive 67 cents per $4 box sold.

That means Judd and Walker made a sizeable contribution toward the troop’s earning more than $6,700. The Girl Scouts hope to donate a portion of their proceeds to Faithful Friends, Rachel said, and use the rest to take a summer trip to Dollywood.

As individual top sellers in the Hornets’ Nest Council, the girls will each receive a season pass for four people to Carowinds, two stuffed animals, a $250 Build-A-Bear gift card and a Microsoft Surface Pro.

Not bad for selling all of those Trefoils, Thin Mints, Tagalongs, Samoas and Do-si-dos. The girls’ own favorites, by the way, are Tagalongs. They say the top selling cookie for them was Thin Mints, and that jibes with national numbers showing Thin Mints account for 25 percent of the cookie sales.

Girl Scout Cookies have been sold since 1917. Some 175 million boxes are distributed each year, representing $656 million in revenues for the organization.

Even though Judd and Walker are nowhere near the national record for the selling of Girl Scout cookies in one season, you try selling 3,500 boxes of cookies.

“For me, it’s a large load of confidence,” Bailey said of her accomplishment. It’s something she thinks will provide testimony later on to her work ethic.

“It will get you farther in life if that’s on your record,” Bailey said.

Rachel, who has now led her troop’s sales in three different years, said she’s proud of the record and knows it will be an important part of her Scout history.

Stephenie Walker said a typical Girl Scout sells less than 200 boxes. Parents end up selling many of the cookies, but Stephenie Walker said in Bailey and Rachel’s case, the selling came down to them, while the parents helped with transportation, setting up the sales locations and providing meals.

To help with troop sales, the girls sold raffle tickets for every five boxes purchased. They also asked customers to support cookies for the military. If a customer would give $5 for a $4 box, the extra $1 went toward purchasing cookies that will be sent to troops overseas.

Each of the girls said they raised enough extra cash to provide at least 100 boxes for soldiers.

Bailey is the only Girl Scout in her troop with cadet status. The other seven girls, including Rachel, are juniors. As part of earning her Silver Award, Bailey hopes to have the other girls’ help in setting up donation boxes at schools, churches and businesses to collect items such as hospital scrubs, kids pajamas, flip-flops and pillows for Rowan Helping Ministries.

When they made their agreement to tie at 3,500 boxes no matter what, the girls decided, for example, that if one of them reached 3,520 and the other person was at 3,480, the girl with 3,520 would give the other the 20 boxes needed to even things out.

“Which we thought was pretty cool,” Stephenie Walker said.

Within earshot of Bailey, Rachel announced she will be going for a personal record of 4,000 next year.

“I’m not helping you with that, Rachel,” Bailey said. “I’m going to try and have a social life next year. We’ve lately been spending so much time with each other.”

“Too much time,” Rachel agreed.