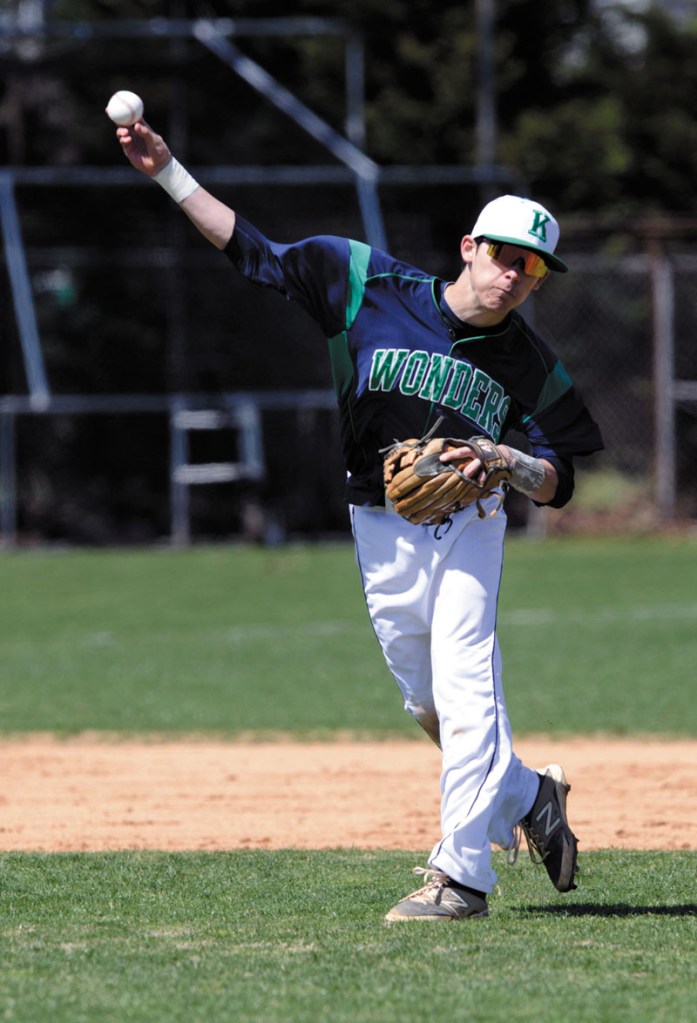 photo by Wayne Hinshaw, for the Salisbury Post A.L. Brown's shortstop Clayton Gilmore (2) making a throw to first base Saturday in a MECKA conference game against Robinson. The Wonders lost 22-0.

Robinson’s 22-0 MECKA win at A.L. Brown’s Veterans Field on Saturday afternoon defied rational explanation, except that virtually anything can happen in a baseball game.

The Wonders entered the game tied for first place in the league. They’d won at Robinson 5-2 on Tuesday. They’d lost in extra innings to red-hot South Rowan on Thursday. They had ace Matt Brown on the mound. They felt confident. They felt good.

Then they went out and lost by 22. Robinson batted around twice in a five-inning game.

“I’m watching a Spring Training game the other day and the Seattle Mariners lose to the (Milwaukee) Brewers 15-1,”  Thompson said. “That’s the best of the best in the world, but it happened. It’s baseball.”

Thompson is in his 16th season of sharing baseball and philosophy with his team. He’s seen it all. Back in 2002 when the Wonders had the pitching to realistically compete for a 3A state championship, they took a 6-1 lead to the bottom of the seventh in a second-round playoff game — and lost 7-6.

Compared to that misery, Saturday’s pummeling barely fazed Thompson. He was disappointed, not angry.

Robinson settled the game in the top of the first, pounding eight hits and taking a 9-0 lead.

Things got completely out of hand in the third when Robinson scored 12 runs on seven hits to make it 21-0.

C.J. White led the 18-hit onslaught for the Bulldogs with a pair of homers. Justin Bundy mowed down Wonders on the mound and held them to two hits.

“It’s a big win because it keeps us in the conference race,” Sarvis said. “If you want to compete for a championship, you can’t get swept by anyone. This gives us a split with A.L. Brown, and that’s a scary team.”

While the Wonders didn’t scare anyone except themselves Saturday, they are still in the race.

“We were coming off two very emotional games and maybe that had something to do with it,” Thompson said. “But give credit to Robinson. They outplayed us in every way. They swung the bats and it fell their way.”