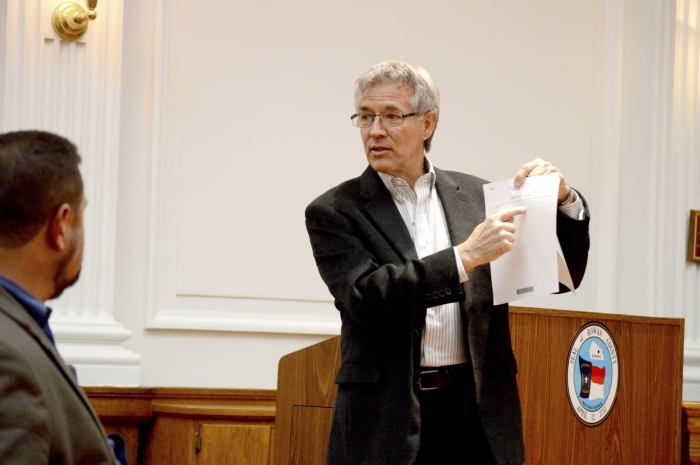 Two areas he focused on included a tax reform bill pending in the state senate and historic preservation tax credits, which passed the house on Thursday. A majority of Warren’s town hall meeting was simply an update on where some bills stood in the legislature.

A bill introduced by Senate Majority Leader Harry Brown was introduced early last week. It proposed to shift more sales tax money to rural areas, but would negatively affect Rowan County’s towns and cities. Another, similar bill was introduced this week by Sen. Bob Rucho, a Republican who represents Mecklenburg County. Unlike Brown’s bill, Rucho’s bill would be a net gain for Rowan municipalities, according to some estimates. Warren said Rucho’s bill would shift more money to municipalities than counties when compared to Brown’s bill.

“What you’re going to see between those two bills, coming from the senate primarily, is an extension of the struggle for equity in treatment between municipalities, the urban areas and the rural areas,” Warren said.

Prior to the bill being introduced into the N.C. House, Ford expressed opposition to the current program. In previous interviews with the Post, Ford said the program had been abused by certain developers. Ford also previously questioned the historic value of some buildings that had been renovated.

When the bill came up for a vote, both Ford and Warren voted to pass the historic tax credit program described in the bill. The bill provides for a program with a lower base incentive amount than the prior program, which expired at the conclusion of 2014.

Some legislators have said municipalities should provide a part of the tax credit for historic preservation projects.

Warren said during the town hall meeting that he believes there is a benefit to the historic tax credit program, but has an alternative bill prepared in case the current bill doesn’t pass the senate.

The Rowan County Democratic Party will have its county convention on April 18, and the party’s current chairman says he’s interested in serving another term.

Chairman Geoffrey Hoy was appointed to the party’s top position late last year when Veleria Levy stepped down to take care of family issues. When the party meets in April it will formally elect its chairman.

When asked, Hoy said he wasn’t actively campaigning for the top spot, but would be interested in serving again.

“I am more than willing to serve if re-elected, but honestly I haven’t begun to think about that,” Hoy said.

One of the items Hoy mentioned as an area the local party could work on is grassroots organization.

Senators from across North Carolina filed about 200 bills Thursday as the division of the N.C. General Assembly hit its filing deadline. Rowan’s Senators Andrew Brock, R-34, and Tom McInnis, R-25, were no exception to the filing frenzy.

Brock is the primary sponsor or co-sponsor of nearly 30 bills that were filed on Thursday. Some of the bills would: require local governments to post contact information and certain documents on its website for transparency; allow wage garnishment to enforce the awarding of monetary damages in a civil judgement; and require that elections currently conducted on a non-partisan basis be conducted with parties listed on ballots.

Some of McInnis’ latest sponsored and co-sponsored legislations would: require all professors teach a minimum of eight class courses per academic year; create a Teach for North Carolina Pilot Program; and require registered sex offenders to notify a community college’s registrar office before enrolling.

She’s a commissioner and a fashionista.

County Commissioner Judy Klusman participated in Wednesday’s Fashions for a Cause at Catawba College as a model.

The event is in its 17th year. Proceeds benefit the Community Care Clinic.