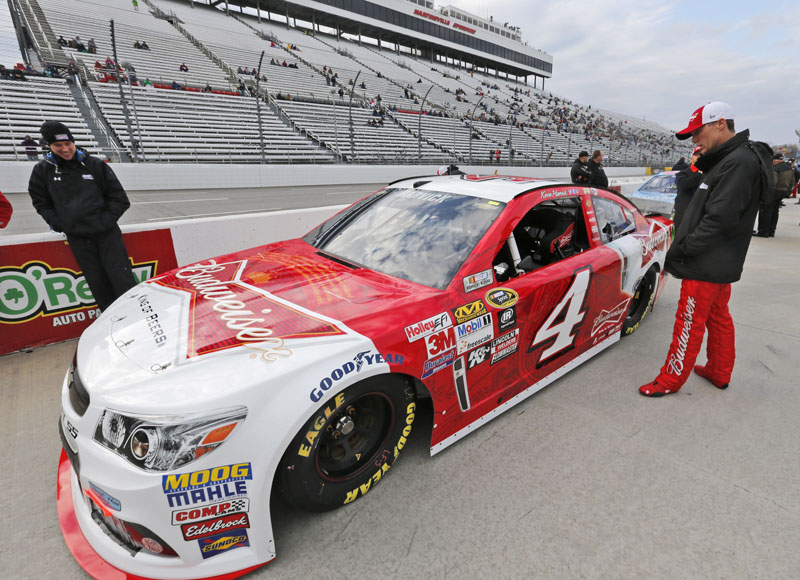 Kevin Harvick and other drivers will be hoping for sunny weather today at Martinsville Speedway in Martinsville, Va. (Associated Press file photo)

MARTINSVILLE, Va. (AP) — There’s been lot of talk about tires in the NASCAR garage the past few weeks, or longer, and lots of theories about whether something shady is going on or if the chatter is just a bunch of hot air.

After last two races, NASCAR confiscated tires from teams. It took tires from red-hot points leader Kevin Harvick and Joey Logano after the race at Phoenix two weeks ago, and declared them fine a few days later. It took tires from Harvick, Kurt Busch, Paul Menard and Ryan Newman last weekend at Fontana.

Harvick, the defending series champion, has won twice this season and finished first or second in eight consecutive races dating to the end of last season. It’s the second-longest such streak in NASCAR history. Seven-time series champion Richard Petty did it in 11 straight races in 1975.

Several drivers think there is something to be found during these so called tire audits.

Four-time series champion Jeff Gordon had his tires confiscated in 1998 after a race, and his team was cleared of any wrongdoing, but he’s a believer that some teams are tampering with their tires.

Air pressure in tires rises during a race, and Gordon is a proponent of NASCAR allowing bleeder valves that would allow the tires to maintain a certain level. They are not allowed now, however, and rumors that some teams have devised ways to create that effect have caused
NASCAR to take a closer look.

Goodyear, which provides the tires for races, offers a recommended tire pressure for each race. Teams can choose to follow that guidance or use a different pressure, but not alter it during the race. Many choose a lower pressure, knowing the racing will cause the pressure to rise over time.

“There is a lot of talk, there is a lot of dialogue and there are a lot of rumors in the garage,” said Alan Gustafson, crew chief for Gordon. “Yeah, I think it is obvious that some people think something is going on, and is NASCAR reacting to that? Or do they feel uncomfortable with what is going on?

“I don’t know that answer. But I do think that it is something that is on the forefront of a lot of people’s minds. Obviously NASCAR is trying to make sure that we are all on level playing field and if anybody is violating that, they will pay the price, which they reminded us this morning is very stiff.”

Denny Hamlin thinks if a team is found cheating, the penalty should be harsh, and permanent.

“I know NASCAR sat down all the crew chiefs last year in Phoenix and told them to stop doing it,” Hamlin said after practice Friday. “My guess is that if they said stop then they’ve seen something.

“If it’s out there and they know about it, you should be gone forever. That’s a major, major thing and this isn’t like the old rodeo days of being able to go out there and run a big motor or soak the tires.

“This is a professional sport and people alter tires — that’s a big, big deal. Definitely no room for it in the sport, that’s for sure. Hope they clamp down on that if they do find it and if they find it multiple times with somebody, they should have a permanent vacation somewhere.”