NASCAR: Fans of The Paperclip 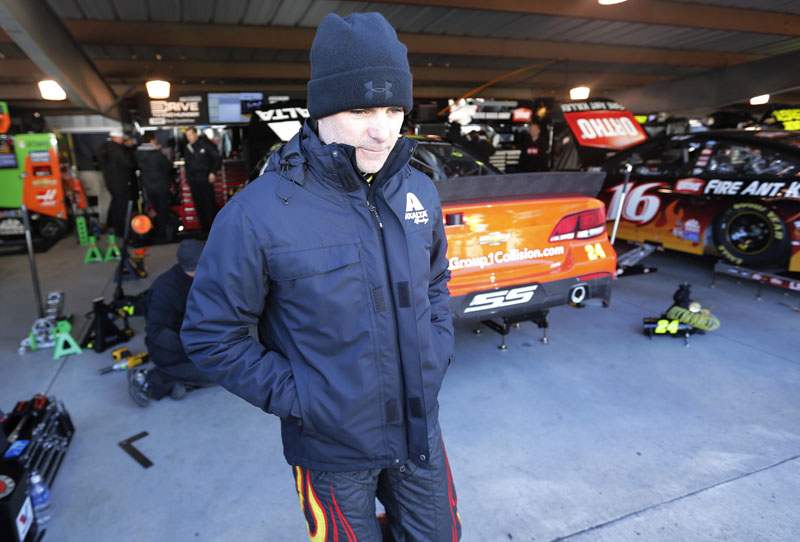 The Associated Press Jeff Gordon is bundled up for the cold as he leaves the garage after practice for Sunday’s race at the Martinsville Speedway in Martinsville, Va. Gordon is a huge fan of the track and said it is one of the few places he would want to race again after retiring.

MARTINSVILLE, Va. (AP) — If Jeff Gordon ever decides to race again after his 2015 retirement tour is finished, it would likely be at Martinsville Speedway, a track where the four-time champion has had great success.

Gordon and Hendrick Motorsports teammate Jimmie Johnson lead active drivers with eight victories on the 0.526-mile paper clip-shaped track, which has been hosting races in southwest Virginia since 1947.

“Martinsville is probably the reason, when we made the announcement in January, why we left that little bit of window and door open,” Gordon said of the possibility that he will still race occasionally following this season.

“This is probably the first track that comes to mind for me that if I ran another race — not that I have plans to — that I’d do it at Martinsville. Truck, Cup, maybe Late Model. I just love this track.”

Gordon also has won seven poles at the track, and will start fourth in Sunday’s first of two visits to the track this year.

Gordon’s teammate, Dale Earnhardt Jr., has won at Daytona and got his first victory at Martinsville last fall.

“You want them both pretty bad,” he said, the latter not only because the smallest track on NASCAR’s top circuit is also the oldest, but because it gives a grandfather clock as a trophy.

And, Earnhardt adds, it’s a track where the driver has plenty of impact on the outcome.

“It takes some driver to win here,” Earnhardt said. “I don’t often take a lot of credit for everything we do good out there, but I will say that at Martinsville it does take a little bit of driver to do well here. I feel like when you win at certain tracks like Martinsville you can feel good about it that you were part of that puzzle and part of making that happen.”

It took Earnhardt 30 races to finally get that victory, and many more visits.

Growing up in Kannapolis, North Carolina as the son of a NASCAR star, the younger Earnhardt usually got to come to the races at Martinsville because it is just over 100 miles from his hometown.

His father won six times on the track where physical racing is the order of the day.

“You could get right up on the action, man, right against the fence down there in the corner and see the guys coming through there in practice,” Earnhardt said. “And you could see the balance of the cars and what they were dealing with. It is just a fun place to be at, even as a kid. … just been coming here a long time and I always wanted to win. That clock makes it even more special and more desirable.”

For Gordon, it’s also a place where not much changes.

“When you look at every other track on the circuit and especially the bigger tracks where aerodynamics start to make a huge difference, that changes how you drive the car, how you set up the car, and the knowledge you have to have of all the data and technology that’s going on with the cars,” he said.

“This one, you don’t have to worry that near as much.”

You do, however, how to worry about the inevitable contact on the track, and tempers.

“Usually where there is contact, it affects somebody negatively and that person feels like it could have been avoided and the other person sometimes doesn’t,” Denny Hamlin said. “There’s a disagreement. It’s just part of this race track.”