Column: All eyes on Catawba’s Albertson 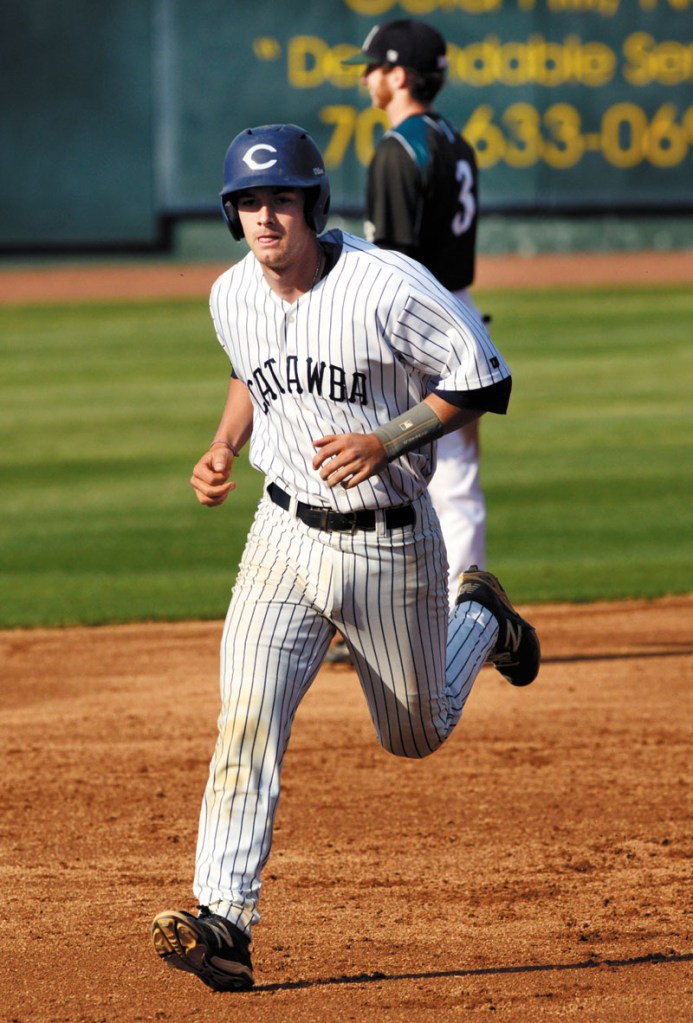 SALISBURY POST FILE PHOTO Catawba catcher Will Albertson was drafted Wednesday by the New York Yankees in the 40th round of the MLB Draft. Albertson has a unique situation with the Yankees right now.

Will Albertson describes himself as a “laid back,” “relaxed,” and “just kind of a low key” guy. Foremost, he doesn’t like to talk about himself, so what follows will be a touch embarrassing for him because it’s about how great he has been playing in the last month.

The Indians’ junior catcher was batting .735 (39-of-53) in 12 games leading up to Saturday’s doubleheader at Coker in South Carolina. He’s mashed eight home runs, eight doubles and a triple. So whether or not he likes it, the spotlight for now is on him.

“I can’t really avoid it now that everybody is trying to talk about it,” Albertson said.

He gets phone calls and messages from family, friends and former teammates at Campbell.

Albertson was the South Atlantic Conference Player of the Week twice in a row and on March 18 was named both the Southeast Regional and national hitter of the week.

That’s great and all, but Albertson gets energized when talking about the Indians’ recent winning streak and how well those around him are doing.

Here’s a brief story that will almost tell you everything you need to know about Albertson.

He went 5-for-5 with a pair of home runs Tuesday against Mount Olive. It’s a great day for any hitter. The Indians, however, lost 12-10. He would have traded his day at the plate for the victory.

“I’d rather go 0-for-5 with five punchouts and us get the victory instead of me go 5-for-5 with two home runs and lose any day of the week,” he said. “No doubt.”

Here’s another story from that afternoon. It’s about the level of fear Albertson puts in opposing teams. The Indians, after Blake Houston’s two-out solo home run, were down 12-10. Austin Stilley struck out to end the game with Albertson was on deck. He said he wasn’t going to try to hit a home run and instead just put the ball in play.

Had Stilley reached base, Albertson likely would not have had a chance. Even if the bases were loaded in that situation, Mount Olive coach Carl Lancaster said Tuesday he would have walked Albertson and let the Indians score instead of giving him a crack at a walk-off hit of any kind.

“I take it as a compliment in terms of respect, I guess, with the way I’m swinging it right now,” Albertson said.

He stretched his hitting streak to 13 games with a pair of singles in the first game of a doubleheader at Coker. The streak ended in the second game, although the Indians won 7-2. It was his first hitless game since March 7.

It took Albertson a little bit to get hot. There were multi-hit games here and there, but nothing jumped off the page.

“He was in a slump right out of the gate,” head coach Jim Gantt said. “…He started off slowly and then all of the sudden he catches fire that was unseen before.”

Gantt said he has never seen anything like this in his 20-year career as head coach at Catawba.

And while it’s been amazing to watch and bordering on unbelievable, Albertson’s performance is not unexpected.

“You don’t really think that’s realistic what he’s doing, but he’s doing well,” pitcher/third baseman Craig Brooks said. “It ain’t really a surprise to me because I knew he could do it. It’s just unbelievable a player could be that good.”

The secret could be in Albertson’s approach. His hitting style is like that laid back personality he talked about. He’s even keeled and stays within himself regardless of what’s happening on the diamond. He doesn’t go for home runs. He just wants to help the team.

Albertson called it his forté.