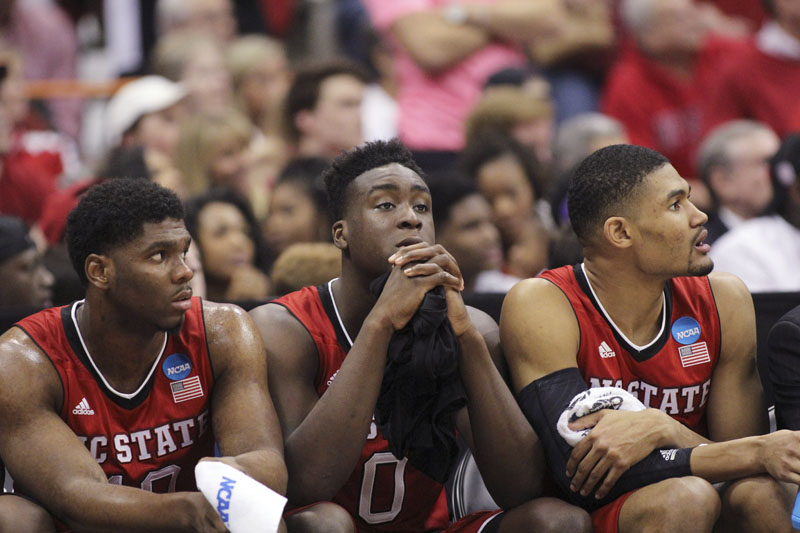 The Associated Press N.C. State's Abdul-Malik Abu (0) reacts with teammates Lennard Freeman (10) and Kyle Washington during the second half of a Sweet 16 loss to Louisville in Syracuse, N.Y. Louisville won 75-65.

SYRACUSE, N.Y. (AP) — “Survive and Advance” had become the mantra again for North Carolina State, a tribute to the late Jim Valvano and his improbable championship with the Wolfpack in 1983.

N.C. State survived its first two games in the NCAA Tournament, creating some March magic of its own. The Wolfpack rallied from 16 points down to beat LSU by a point, then sent top-seeded Villanova home with a 71-68 victory last Saturday night to reach the round of 16.

That postseason run ended Friday night, the Wolfpack unable to will another victory as Louisville rallied late in a game that saw seven lead changes to win 75-65 in the East Regional semifinals.

“I’m proud of those guys. I’m happy for them,” Wolfpack coach Mark Gottfried said. “The guys coming back for our team, this should be something that motivates them to work extremely hard in springtime and summer. We tasted it. We tasted what it’s like to be in this situation, and now it’s got to be one of those where they should want it more.”

Trevor Lacey led the Wolfpack with 18 points, while Ralston Turner had 12 and Kyle Washington 11.

Speedy guard Anthony “Cat” Barber, the spark of the Wolfpack’s attack, finished with eight points on 3-of-14 shooting, only briefly getting untracked early in the second half.

The Wolfpack’s bigs faltered repeatedly inside as Louisville outscored N.C. State 40-24 in the paint and finished 27 of 54 from the field. State’s BeeJay Anya, Abdul-Malik Abu and Lennard Freeman combined to shoot 4 of 14 and registered just two blocks, two fewer than the Cardinals.

“We had a lot of ups and downs,” Anya said. “I’m proud of my team, the way we finished out and the way we came together as a team when things weren’t looking too good. We stuck it out when people counted us out.”

Louisville (27-8), the fourth seed in the East and seeking to make its third Final Four in four years, will play seventh-seeded Michigan State in the East final on Sunday.

North Carolina State (22-14), the eighth seed, saw its postseason run end against a team that refused to quit.

“Late in the game they made some plays there that were the difference,” Gottfried said. “He (Anton Gill) made a couple of tough shots there. I thought it was that little stretch that gave them the cushion, and it was the difference in the game.”

Louisville wasn’t given much chance of playing in late March after it lost two of three entering the NCAA Tournament, but gritty wins over UC Irvine and Northern Iowa had the Cardinals brimming with confidence.

Guard Terry Rozier had 17 points and a career-high 14 rebounds and freshman guard Quentin Snider added 14 points for the Cardinals.

Louisville coach Rick Pitino has a 12-1 record in Sweet 16 games, 6-1 with the Cardinals.

Before the game, Pitino promised a surprise and Gill delivered. Gill, who averaged 9.5 minutes and 2.4 points during the season, hit a runner and a 3 from the right corner in a span of a minute as Louisville regained the lead late in a seesaw game. He followed with a tough baseline drive through traffic for a 62-57 lead with 3:33 left.

“Anton and I had an interesting conversation the other day,” Pitino said. “I said, ‘You’re going to get your opportunity, son.’ He went in and basically won the game for us.”

And he did it against his hometown team.

“It’s kind of weird. I didn’t really realize we were playing N.C. State,” Gill said. “We’ve been so focused on what we need to do as a team. It’s funny how things work.”

After Gill’s drive, Lacey missed and Rozier stormed back on a fast break, his off-balance shot caroming in off the back of the iron as Turner committed a foul. Rozier calmly made the free throw to complete a three-point play for a 65-57 lead with 3:05 left.

Harrell’s driving layup with 1:41 to go boosted the lead to 67-57 and that effectively put an end to the Wolfpack’s postseason run.

“That stretch right there, they had some separation right at that point of the game,” Gottfried said. “That’s what the game’s about.”

Before the start of the second half, Gottfried pulled Barber aside at the bench, put his arm around his neck and gave him a pep talk before tapping him on the rear end. Held scoreless in the first half, Barber responded by draining two 3-pointers to boost the Wolfpack’s lead to 39-31.

Unfazed, Louisville responded with a 16-2 run to regain the lead. Snider hit a 3 from the right wing just seconds after Mangok Mathiang had stuffed Abu at the rim and two free throws by Wayne Blackshear put the Cardinals up 47-41 with 12:58 left.

Determined to keep its storybook run going, the Wolfpack rallied again. Lacey’s 3 from the top of the key gave them a 54-53 lead with 7:15 left.

N.C. State: The Wolfpack were wildly inconsistent all season. They handed Duke its first loss of the season, but also lost by double digits to Clemson. They went from not winning consecutive games for more than two months — State went 6-10 from mid-December to mid-February — to closing the season with five wins in six games, something they hadn’t done in 27 years.

Louisville: The Cardinals have won seven of their last eight regional semifinal games. … Pitino moved to 53-17 in the tournament, tying Syracuse’s Jim Boeheim among active coaches in tournament wins. … It was the 21st Sweet 16 appearance and a school-record fourth straight for Louisville, which has made two of the past three Final Fours, winning the title in 2013.