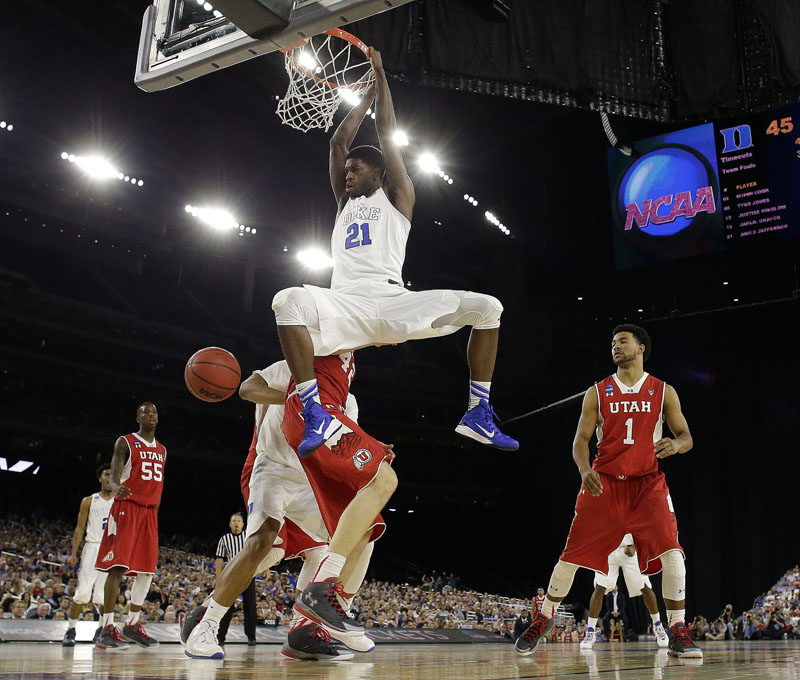 The Associated Press Duke's Amile Jefferson (21) dunks against Utah during the second half Friday against Utah. The Blue Devils advance to the Elite Eight where they play Gonzaga.

HOUSTON (AP) — Mike Krzyzewski and Duke are one win away from getting back to the NCAA Final Four, this time with a talented group of freshmen.

Justise Winslow, the freshman from Houston playing at home the day after his 19th birthday, had 21 points and 10 rebounds for the South Regional’s top-seeded Blue Devils in their 63-57 Sweet 16 victory over revived Utah on Friday night.

Duke (32-4) is going to its 20th regional final, the 14th under Coach K for the most by any active coach. The last Final Four appearance was in 2010, when the Blue Devils also went through Houston on way to their fourth national title.

Winslow is one of three freshman starters for Duke, a trio that includes standout big man Jahlil Okafor and guard Tyus Jones, who had 15 points. Okafor had six points and eight rebounds.

“He gave us his trust and just believed in us,” Winslow said of Krzyzewski. “When you have that, you play like yourself.”

The Blue Devils play No. 2 seed Gonzaga (35-2) on Sunday in the South Regional final, with the winner going to Indianapolis for the Final Four. The Bulldogs beat 11th-seeded UCLA 74-62 in the earlier game Friday night at NRG Stadium, the home of the NFL’s Houston Texans.

Utah and its Coach K, Larry Krystkowiak, got to the Sweet 16 for the first time since 2005, and only three years after winning six games in Krystkowiak’s first season.

Leading scorer Delon Wright was the Utes’ only senior starter, and Bachynski the only other graduating player who played regularly.

Wright, who got his third foul on a questionable call with about 5 minutes left in the first half, finished with 10 points on 4-of-13 shooting. Dallin Bachynski added 11 points for the Utes, and 7-foot freshman Jakob Poeltl had 10 points and eight rebounds.

Even after Utah didn’t score until nearly 5 minutes into the game, Duke was down 8-5 before going ahead to stay with an 8-0 run in just over 2 1/2 minutes when all the Blue Devils freshman starters scored.

That spurt was included four free throws by Quinn Cook, the senior guard who also made it to a Sweet 16 in 2013 — but was also part of the Blue Devils squads upset in their NCAA openers last year (Mercer) and in 2012 (Lehigh).

Wright got his third foul with 4:57 left in the first half in a scramble for the ball — under the Duke basket and in front of the Utah bench. Wright and Winslow were both on the floor, the Duke freshman on his back, when the foul was called.

Utah cut the deficit in half after Bachynski had a three-point play — after Okafor’s second foul with 1:22 left — and then added two more free throws with 33 seconds left.

Wright got back in the game after halftime, making a jumper on the first shot for a 27-24 score. The Utes never got closer.

Utah: The Utes missed their first nine shots before Poeltl scored inside with 15:19 left in the first half. And they trailed only 3-2, before Bachynski scored six points in a row for an 8-5 lead.