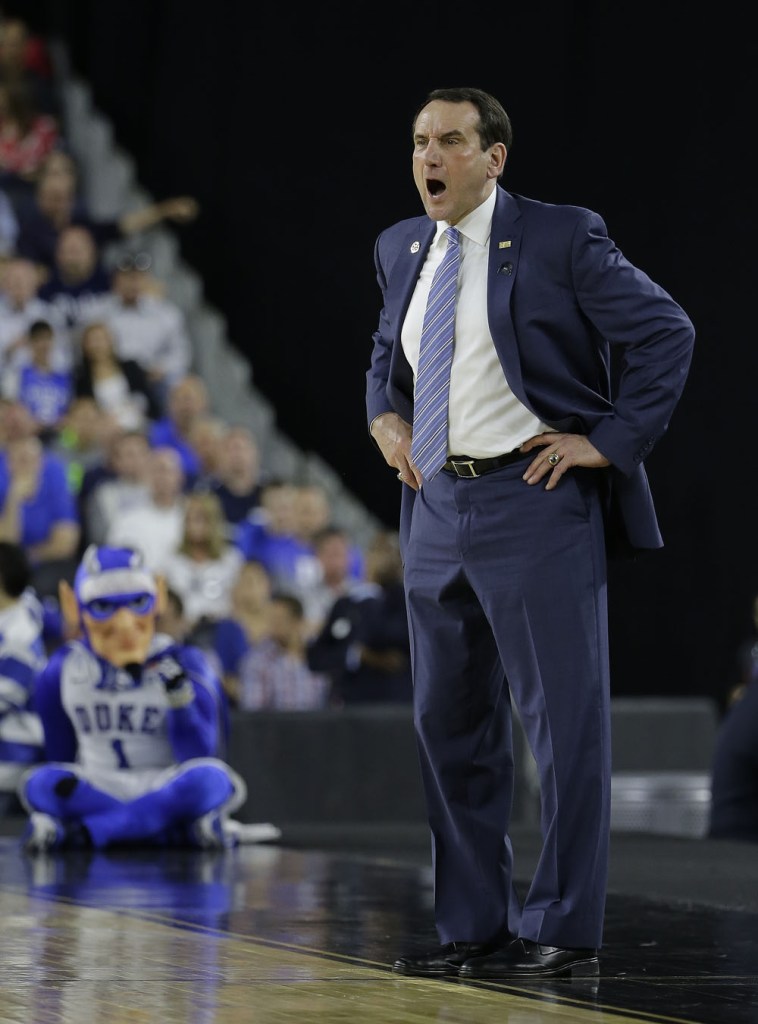 The Associated Press Duke head coach Mike Krzyzewski reacts during the second half of a college basketball regional semifinal game Friday against Utah in the NCAA Tournament in Houston.

HOUSTON (AP) — Gonzaga and coach Mark Few have been a constant presence in the NCAA Tournament, even if the loveable Zags rarely get this deep into March Madness.

The Bulldogs were a No. 1 seed only two years ago when they got upset in the second round, and who can forget floppy-haired big-scoring Adam Morrison nearly a decade ago — yep, back in 2006, when the trendy pick blew an early 17-point lead in a Sweet 16 loss to UCLA.

Now they are a win away from their first Final Four, with omnipresent Duke and Coach K’s top-seeded Blue Devils (32-4) up next Sunday in the South Regional final.

“Probably the highest compliment I could pay him is literally everything we’ve tried to do at Gonzaga, we always ask, ‘What did Duke do here?’” Few said.

Duke is in its 20th regional final, the 14th under Mike Krzyzewski for the most by any active coach.

This is the 17th consecutive NCAA trip for the Bulldogs (35-2), but their first regional final since 1999 — back when they were still considered a Cinderella story, an image shed with impressive consistency. That improbable advance as a No. 10 seed started their NCAA run, when Few was still an assistant the year before becoming the head coach at Gonzaga.

“This moment is big for this team. They’re hungry to get to a Final Four and to keep playing,” said Few, whose focus is on this team not what happened in the past.

“We wanted to be a team that got (to the Elite Eight) as well, just make a statement that we’re one of the top programs in the country,” senior guard Kevin Pangos said. “It’s a great feeling to be here, but we’re not satisfied. We really want to make that next step.”

When they step on the court at the NRG Stadium, the tough-shooting venue that is usually the home of the NFL’s Houston Texans, it will be only the third-ever meeting between the schools. Duke won regular-season games in December 2006 and December 2009.

“Growing up … I can remember Adam Morrison being a big-time player, him always being compared to J.J. Redick, I remember that year, they had a heartbreaking loss to UCLA,” said Quinn Cook, the Duke senior guard surrounded in the starting lineup by three standout freshmen. “This team this year, they’re outstanding, experienced, they have a lot to prove. They’re very confident, they feel they’re a championship-level team. … We’ll have our hands full.”

The freshmen trio of Jahlil Okafor, Justise Winslow and Tyus Jones have gotten Duke within a win of its 16th Final Four.

The Bulldogs have set a school record for wins. Their only losses were in overtime in December at Arizona, another Elite Eight team, and by three points to BYU long after they had wrapped up another West Coast Conference title.

“Gonzaga’s not just a great team, but a great program. Mark’s built a great, great program there,” Krzyzewski said, adding that Kentucky’s pursuit of an undefeated season has overshadowed what teams like the Bulldogs have accomplished this season.

TOO FAR APART: When asked why Duke and Gonzaga haven’t played more often, Krzyzewski initially answered with one word: Distance. The schools are 2,500 miles apart, on opposite sides of the country.

“To get out there, for them to come, very, very difficult,” he said. Plus, the Blue Devils play a top-flight schedule already every season.

Few said his philosophy is to “schedule as hard as possible” and that he enjoys playing those kinds of games.

“They’ve got a lot of people that want to — if you interviewed every coach in Division I, they would probably want Duke on the schedule,” Few said. “We kind of have to deal with that on a smaller deal regionally and somewhat nationally with guys always wanting to schedule us. I’m sure we’ll do something again.”

Gonzaga has five freshmen on its roster, only two who have played since mid-February. They account for only 17 percent of the minutes played and points.