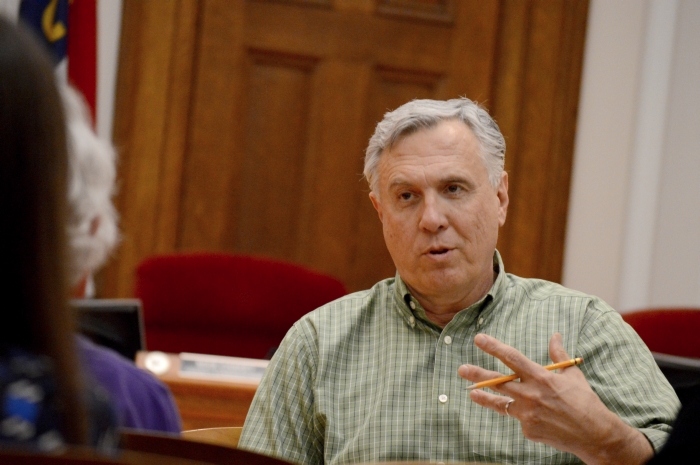 Liberalism is dead and the nation’s institutions are disintegrating, at least according to Catawba College history professor Gary Freeze.

Freeze, a self-described liberal, spoke to the Rowan County Democratic Party during its regularly scheduled meeting on Thursday. Freeze focused his speech on a cyclical model of American political history that consists of three specific cycles — each ends with a great crisis.

Freeze’s first cycle, titled “the agrarians” — 1801 to 1860 — was interrupted by a wood crisis, which led to civil war and reconstruction. The crisis didn’t pertain to production problems, Freeze said, but rather the relative necessity of wood for the farming of wheat — common in northern states — compared to cotton — a common crop in the South.

In Freeze’s model, the most recent cycle — 1942 to 2001 — is titled “the liberals.” Freeze admitted that the end of the most recent cycle isn’t perfect, as it’s fairly close to present day. He proposed 1995 and 2008, the start of the economic crisis dubbed the Great Recession, but the great crisis he described related to oil.

“You always have a crisis of energy,” Freeze said. “There was a wood crisis, an electricity crisis and we have gone through the oil crisis. So, when oil begins not to be as cheap, conservatives begin to win. I mean it’s undeniable. What is the conservative movement? It comes along when energy prices begin to hit the pocketbooks of the very people that the democrats had helped in the deal coalition.”

The oil crisis ended a period, according to Freeze’s model, of over 50 years of Democratic rule. Each of Freeze’s cycles in the model are 55 to 60 years. Freeze’s model, which dates back to 1801, just after the French Revolution. His model suggests that the next half century would be dominated by Republicans.

“We don’t know which institutions will survive and which ones won’t,” he said.

Public education was one topic he focused on specifically.

“Public education is under assault,” he said.

He used charter schools as an example of a way to break up the traditional institution of public schooling. Some attendees criticized the point, citing a frequent failure rate of some charter schools.

Freeze may have come across as pessimistic, but he said each cycle in his model begins with a new, important invention. And, the invention that will start the next cycle hasn’t come yet, he said.