Casey Parsons sentenced to 10 years, Sandy given 8 in federal prison 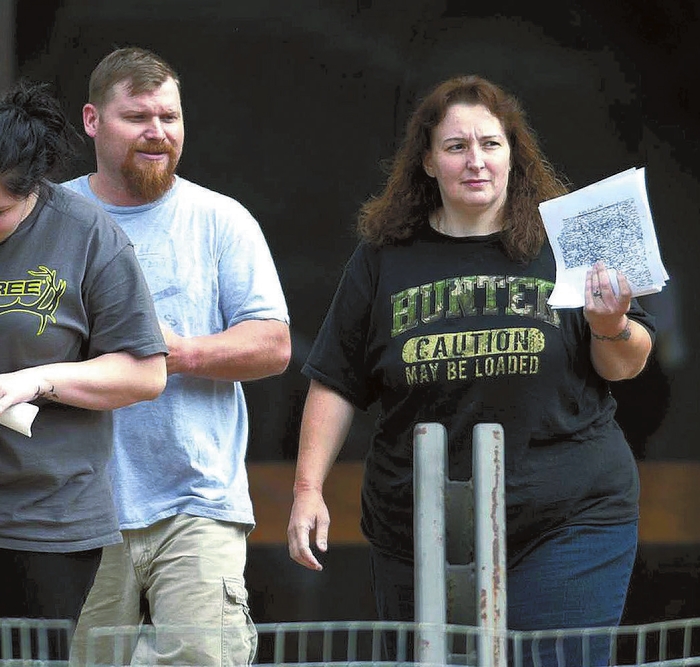 WINSTON-SALEM — Sandy and Casey Parsons will spend the next several years in federal prison after being sentenced Friday on fraud charges. The adoptive parents of missing teenager Erica Lynn Parsons were immediately taken into custody.

The two will first go to a local jail and then be turned over to U.S. Marshals. Judge Thomas Schroeder sentenced Sandy Parsons to eight years and his wife, Casey, to 10 years.

The sentencing hearing began Friday with a recap from Schroeder.  The judge went facts and testimony from the February hearing, which was continued so he could include more details regarding the abuse of Erica Parsons — and some key points that the Parsonses disagreed with in the facts of the case.

Schroeder had some scathing words for both Sandy and Casey, whom he believes killed the teen or did something to get rid of her, he told the court.

He told the couple he was sentencing them to a sufficient amount of time, but not greater than necessary.

“Despite a search for Erica Parsons, there is a lack of records showing she still exists,” Schroeder said.

The couple said they were contacted by Irene Goodman, who “wanted to get to know Erica.” Casey told a Post reporter in August 2013 that they let Erica visit Goodman at her Asheville home until eventually the teen didn’t want to return.

Investigators have said the couple was not being honest from the beginning and did not provide details that would have led them to find Erica.

James “Jamie” Parsons, the couple’s biological son, reported to the Rowan County Sheriff’s Office on July 30, 2013, that he had not seen Erica since around November or December 2011. In February, he testified in federal court that the last night he saw Erica, she looked sick. He said she complained of breathing problems.

The Parsons couple received government-funded adoption assistance, Medicaid, Social Security, and Food and Nutrition Services after Erica was no longer still living with them. The pair used mail to commit the fraud.

In October, a jury found Sandy Parsons guilty of 43 of the original 76-count federal charges. The charges include one count conspiracy to defraud the government, one count aggravated identity theft, one count false statement to a government agency, 20 counts of theft of government funds, and 20 counts of mail fraud.

Both attorneys requested the couple be allowed to turn themselves in at a later time, but the judge said he wasn’t convinced they would not be a danger to the community. He denied the request.

The judge said Casey would be placed in a facility that could meet her ongoing medical needs and treat her mental health issues.

Judge Schroeder told Casey Parsons she was the mastermind or “brains” behind the whole operation. He then told Sandy although he was a follower in the matters involving the fraud and Erica’s care, he was still a participant.

Casey prepared all of the family’s taxes, including Sandy Jr., who she allowed to “claim” Sadie and Toby on his returns, even though they were not in his household. She received some of the money from Sandy Jr. Testimony revealed Casey was trying to avoid the IRS garnishing any money she would have received if Erica was listed on her tax returns, because she had defaulted on a student loan. The more children listed on her return would have meant less money.

Casey also claimed to be a first-time home buyer in order to seek money from the government. She claimed she’d bought an $80,000 home when she had not.

The Parsonses also had an eBay account where they listed various items for sale. Money was collected, but the two never sent the items. Bank statements show twice in August 2011 that Sandy Parsons withdrew $4,000 and $7,000 from a SunTrust account the couple shared.

“No one has ever claimed Erica on taxes other than Sandy and Casey Parsons,” said the judge.

Sandy Parsons questioned the circumstances surrounding the surrogacy. He said in court filings that the incidents failed to show any criminal activity on his part. He did not sign any documents nor did he go with Casey to Michigan to have the in vitro process done. The judge said Sandy also doesn’t appear to be apart of the eBay scheme either.

Sandy also questioned in court filings that he abused Erica. According to son Jamie’s testimony, he abused Erica, but Sandy questions his truthfulness. The judge countered that point by saying few people saw Erica, which would’ve led to them to see signs of abuse. He also said any parent that inflicts serious injury upon a child or allows it to be inflicted is still guilty of the offense.

Even though no charges have been filed in Erica’s disappearance, the judge said, it can still be inferred that Erica is not alive.

The FBI searched DMV records in all 50 states hoping to find some information on Erica, but were unsuccessful.

The judge said he believed Amy Miller, the Michigan woman who hired Casey in 2000 to be a surrogate for her, was a credible witness. Miller testified in February that Casey told her after six months the baby she was carrying had died. Miller said she didn’t believe Casey had a miscarriage, but couldn’t prove it. She asked Casey to see medical records, which Casey did not have, and Casey eventually changed her phone number and email.

Miller tried for three months to get some answers on her own until she was contacted by a woman who knew Casey well — her sister, Robin Ashley.

The judge said not only did Casey try to defraud Miller by lying to her, but she even tried to sell the baby to her sister, Robin. Casey also told Miller she and her husband, Sandy, would donate the $10,000 Amy and husband, Vern, were paying to her church.

The couple eventually paid Casey the money, but later learned they did not donate it to the church and the pastor of the church had never heard of them.

Testimony revealed there were other women Casey had entered into surrogacy contracts with, but backed out. However, Judge Schroeder said the information was hearsay and not based on fact.

He said he also found Ashley’s testimony to be the truth. Ashley took in Erica twice — when she was 4 years old for a few weeks and then at 6 years old, after Casey said she couldn’t stand to look at Erica because she reminded Casey of her biological mother, Carolyn. Ashley kept Erica for about six to nine months until Casey asked for her to be brought back.

Robin told the court in February that Erica was treated like a little slave. She said the girl was made to do chores, was isolated and regularly was on punishment. Robin looked at a number of pictures seized from the Parsonses’ Miller Chapel Road home by law enforcement and said in all of them Erica was in a corner. The pictures were of the other children, but in the background, Erica could be seen, but isolated.

Schroeder said the fact that Ashley did not tell law enforcement she had asked Casey about Erica’s gnarled hands was not an issue. Casey told her the girl had arthritis, when in fact her crooked hands were the result of Casey bending her fingers back until they broke. Instead of taking Erica to a doctor, Casey said she would place a cast on them herself.

“This court does not believe omission makes her testimony any less credible,” Schroeder said.

The family went on a trip to the beach, leaving Erica behind at Janet and Steve Parsons’ China Grove home. Janet Parsons said in court she and her husband didn’t know Erica was at the home because the young girl was told to hide. Casey and Sandy contend their son Jamie was watching over Erica. However, Jamie said during the hearing he was working at Food Lion at the time and was expected to be gone for long periods of time.

Janet also said she never saw Sandy strike Erica, but he did yell a lot.

Jamie also said he routinely abused Erica from the time he was 5 years old until he turned 16. He said he, his parents and all of his siblings — Sandy Jr., Brooklyn “Brook” and the two youngest, Sadie and Toby, abused Erica. He admitted to breaking her arm once.

He said it was common for Erica to be punched or hit with a belt by all of his immediate family. Jamie said Erica had been beaten so much she had a bald spot in the top of her head and marks on her back.

The judge said, the defense would say Jamie Parsons was a pathological liar just as his uncle Scott Parsons, Sandy’s brother, had said, but he was the only one in the family who reported Erica missing.

Erica either slept on the floor in Sandy and Casey’s bedroom or in the closet inside what was initially Sadie and Toby’s room — later daughter Brook’s bedroom.

Lab tests revealed blood and either urine or saliva from Erica found inside the closet.

Erica was locked in the closet when the family left and was punished if she urinated or defecated while inside. Food was withheld from Erica and she was once made to eat dog food from a can.

After Erica did not return, Casey told the children they took Erica to “aunt Angie’s” a person Jamie said he’d never heard of. Later his parents told them they sent Erica to live with her grandmother, Nan.

The case against Casey and Sandy Parsons was investigated by the Rowan County Sheriff’s Office, the FBI, the State Bureau of Investigation, the IRS criminal investigation and the Social Security Administration.