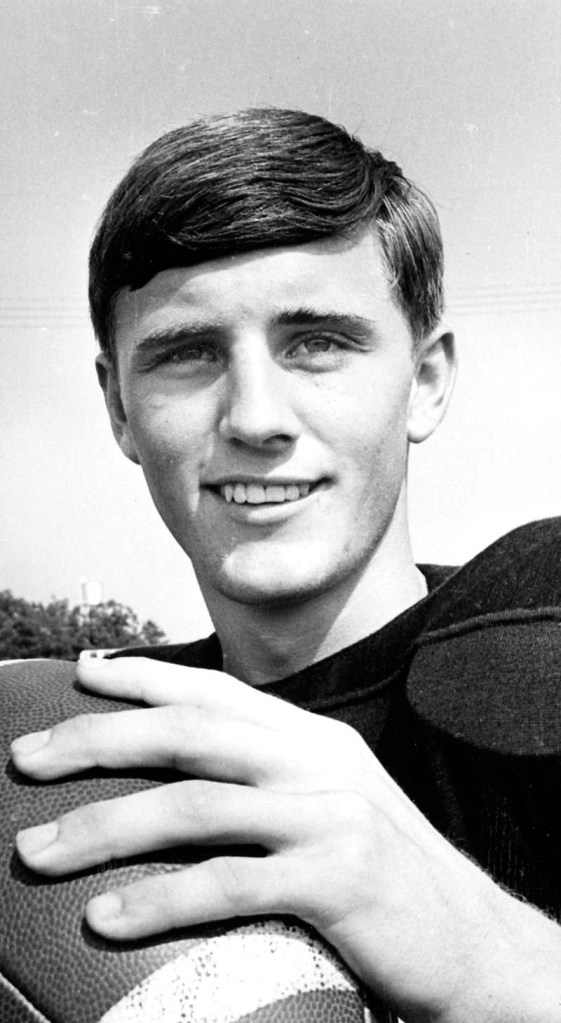 Salisbury Post file photo The late Jay Bradshaw, a 1970 graduate of South Rowan, was a standout athlete for the Raiders in football, basketball and baseball. Bradshaw passed away Monday.

LANDIS — Jay Bradshaw, one of the most notable athletes in South Rowan’s athletic history, died on March 21 in Gastonia. He was 64.

Graveside services were held at the Salisbury National Cemetery Annex on Friday.

He was the son of a Major Leaguer. George Bradshaw, a strapping 6-foot-2 catcher, was born in Salisbury in 1924 and served in World War II from 1942-45. He married Priscillla Honbarger, a China Grove girl, and began his pro baseball career with the Landis Millers in 1946. He was involved in pro ball from 1946-54, usually as a player/manager.

Jay Bradshaw was born on Feb. 26, 1951, shortly before his father began a baseball season with the Class D Morganton Aggies.

In 1952, George Bradshaw played so well he made the jump to Class B Charlotte, and then was called up to the Washington Senators. He played in 10 games for the Senators, went 5-for-23 and drove in six runs. It was back to the minors after that. He hurt his back on a slide to end his playing days, but he batted .310 while appearing in 905 minor league games.

Jay grew up in Pennsylvania. George was scouting for the St. Louis Cardinals when the Bradshaws returned to North Carolina when Jay was 16. George had known South Rowan football coach Lope Linder for years, so his son enrolled at South. Jay was small, 5-foot-10 and 135 pounds, and his father hoped his friendship with Linder would help Jay make the sports teams. As it turned out, that wouldn’t be an issue.

Bradshaw was on the jayvee basketball team most of his sophomore year, but coach Harold Higgins called him up to the varsity late in the 1967-68 season. A quick guard, he averaged 16.1 points the last seven games, including a 24-point outing against Salisbury’s Boyden High.

“He was amazing in basketball,” said Ernie Faw, a teammate of Bradshaw’s in football and baseball. “There was no 3-point line then, of course, but he made shots from all over the place. I always thought basketball was his best sport.”

Bradshaw’s junior and senior years at South Rowan were outstanding. He made the All-South Piedmont Conference teams in football, basketball and baseball.

When Bradshaw was interviewed for the Friday Night Legends series in 2007, he recalled hitting a home run to win a baseball game against Asheboro, and then having a coach drive him to North Rowan to compete in a track meet. He was that kind of all-round athlete.

“This area was full of athletes then,” Faw said. “Jay was the best we had at South.”

Baseball was Bradshaw’s third sport, but he had his father’s genes. He was a catcher and shortstop  and usually was the No. 3 hitter.

He averaged 16.5 points in basketball and was the school record-holder for career points (725) when he graduated. He scored a career-best 28 against Concord.

Still, it’s for football that he’s best remembered. He played quarterback as a junior and running back as a senior and he was an all-conference safety on defense. He punted, returned punts and kickoffs and held on placements, so he never left the field.

South Rowan went 1-9 in 1967 in football, so little was expected in 1968. South Rowan was competing in the SPC against A.L. Brown, Lexington, Concord, Salisbury Boyden, Albemarle, Thomasville, Asheboro and Statesville.

Bradshaw led South Rowan to a 4-5-1 record. A tie with Concord was achieved by Bradshaw’s touchdown pass to Don Bost as time expired.

Bradshaw’s status for A.L. Brown’s visit on Nov. 1, 1968, was iffy because of bruised ribs. To protect the ribs and play in the game, Bradshaw wore a foam rubber pad under his uniform. South Rowan’s offense relied on sprint-out passes by Bradshaw, who would take off if no one was open. Linder gave him strict orders not to run against the Wonders.

Trailing 7-0, South Rowan faced fourth down at the A.L. Brown 6. Linder reluctantly called for a sprint-out pass. Bradshaw ran. He dodged a half-dozen tacklers and got the first down at the 1. Fullback Ronnie Pethel scored on the next play, and it was 7-7.

South Rowan took the lead on a safety and went on to win 16-7. China Grove and Landis celebrated.

That was Bradshaw’s golden moment, but he also enjoyed two plays he made his senior season at halfback. Against Thomasville, he disappeared into a crowd of Bulldogs only to emerge in open field and headed for a touchdown. The camera man had been so sure he was down he’d stopped filming. Bradshaw got a kick out of that.

His final football game was against Statesville, and South Rowan won 21-6. On the defining play, Bradshaw had a punt blocked, but he chased down the Greyhound who scooped up the ball and forced a fumble when he made the tackle.

“Years after high school, a lot of us got back together and played on good softball teams,” Faw said.

As a shortstop and outfielder, Bradshaw earned All-World honors playing softball for Gary’s Barbecue when he was 40. That’s when he hung up his glove. He went out on top.

He took up golf after that and quickly was shooting in the 70s.

“Jay was a great athlete and he had a great personality,” Faw said. “Everyone liked him.”