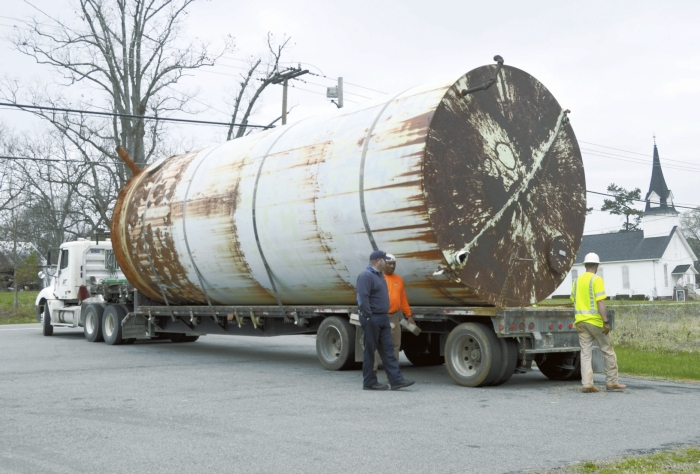 The Enochville Fire Department acquired this 34-foot tall water tank from the Mount Mourne Fire Department in Mooresville. The China Grove based fire station will use the tank to fulfill a much needed water supply point. There are few nearby hydrants in the 9.8 square mile fire district. Shavonne Walker/Salisbury Post

CHINA GROVE — “I didn’t expect it to be that big,” said an Enochville firefighter as a big rig hauling a 34-foot tall water tank backed up to the side of the Enochville Fire Department.

The fire department, located on North Enochville Avenue, acquired the tank from the Mt. Mourne Fire Department in Mooresville. It took a crew consisting of about six men from a grading company, a moving company and crane operators to lift the tank into place.

The need for the tank boils down to lack of water supply for the fire department.

Mackey said the Enochville fire district is 9.8 square miles, serves 4,400 people and 2,400 buildings that include residential, schools and commercial spaces. This water tank will provide a much needed supply.

He explained this will help the department, which is trying to improve its ISO rating. The ISO rating takes into consideration a community’s fire protection services.

The Mt. Mourne Fire Department had two tanks because they had a similar issue with water supply. When their water supply improved they were going to get rid of the tanks, but Mackey spoke with the fire chief there and a tank was donated. A fire station in Denver got the other tank, he said.

The whole process took several hours, including removing the tank from Mooresville and setting it in place in China Grove.

Bass Grading Company in Maiden handled the digging and Dellinger Precast in Denver hauled the tank from Mooresville. Both companies had worked with moving and digging for an above ground tank before. Crane and Rigging Corporation in Yadkinville moved the tank off the truck, straightened it and placed it into the ground.

The companies all had experience in this type of move and they all were also able to obtain the necessary permits it took to do the work. This has been an ongoing process, Mackey said, for about two years.

The department and its board began looking at its water supply and acquiring the tank since 2012.

A small group of Enochville firefighters stood between the station and the hole that would hold the tank, taking pictures and video of the whole process. Some of the firefighters joked about who would paint it.