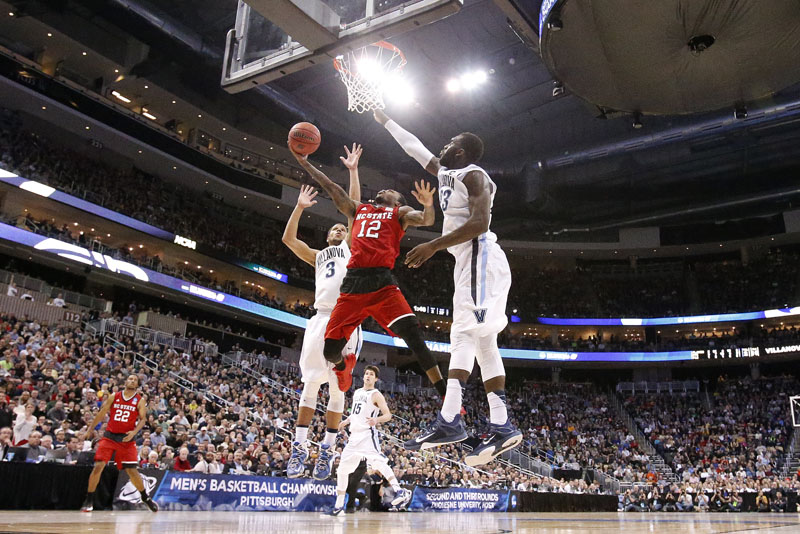 The Associated Press N.C. State's Anthony Barber (12) shoots between Villanova's Phil Booth (5) and Daniel Ochefu, right, during the second half Saturday in a Round of 32 game in Pittsburgh. NC State battles ACC foe Louisville in the Sweet 16 on Friday.

Except it isn’t. The winner advances to the Elite Eight of the NCAA Tournament and the loser goes home.

“Even though it’s the Sweet 16 game, it’s pretty much a league game. We knew at some point we would play an ACC team, and we’re ready for it,” North Carolina State guard Cat Barber said after practice Thursday. “Our league prepares you for the moment.”

The Wolfpack (22-13), the eighth seed in the East, meets fourth-seeded Louisville (26-8) on Friday night in the Carrier Dome in a matchup of teams somewhat familiar with each other. The Wolfpack had the upper hand against the Cardinals in Louisville’s first season in the conference, beating them 74-65 on Feb. 14 in the difficult atmosphere of the KFC Yum! Center in Louisville.

“We have great respect for them,” Louisville coach Rick Pitino said. “They beat us at home. A lot of teams don’t beat us at home. It was a close game, and then they pulled away. They’re a team right now that can beat you so many different ways.”

Louisville, in the Sweet 16 for a school-record fourth straight year under Pitino, isn’t the same team that lost to the Wolfpack. Standout guard Chris Jones, a fierce defender, had 20 points in that game, but when Louisville traveled to Syracuse four days later Jones didn’t make the trip and was later dismissed from the team for off-the-court problems.

The changes have been noticeable. With seven freshmen, the pressure-style play Pitino’s teams thrive on has picked up. In Louisville’s 66-53 win over Northern Iowa on Sunday night, the Cardinals held the Panthers to 39 percent shooting, forced 10 turnovers and outrebounded them 30-25.

N.C. State coach Mark Gottfried has noticed a change at the other end, too.

“They’re all more aggressive offensively,” Gottfried said. “Sometimes, when you lose a good player, especially a guy offensively that can do what Chris Jones could do, those other guys, they know they have to play at a higher level.”

Added Barber: “Sometimes, you get overconfident and don’t come out as aggressive as you did the first time. But we know what we have to do and what we want to do. Now it’s about coming out and playing hard.”