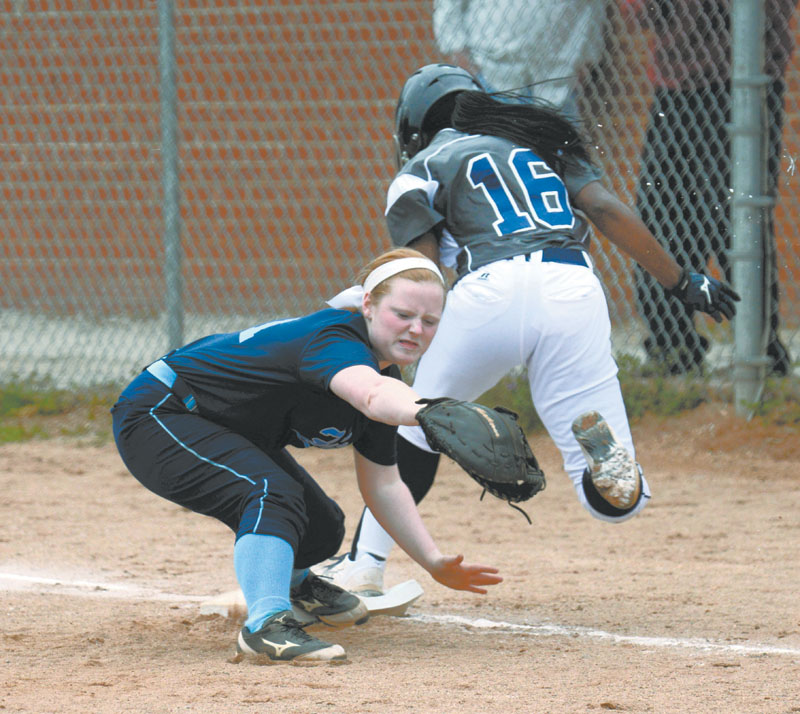 MOUNT ULLA — After enjoying a dominating start to the softball season, the West Rowan Falcons are having to endure a reality check at the moment.

Hickory Ridge came to West Rowan on Wednesday afternoon, pounded the ball early and often and handed the Falcons a surprising 9-6 defeat in the South Piedmont Conference. It was the second consecutive loss for West Rowan (6-3, 5-2 SPC) and dropped it into second place in the league behind Carson.

“We have just got to believe in each other again,” said Falcon catcher Marissa Yow, one of the few bright spots in the loss with a pair of doubles and three RBIs. “We just could not string our hits together today. But I told everybody not to panic because there is a lot of season left to play.”

The Ragin’ Bulls (4-4. 4-3 SPC)  blasted out 15 hits including five doubles against Falcon ace Peyton Greene and built a 9-0 lead before a late rally by West Rowan came up short. Sophomore pitcher Breezy Yelton dominated in the circle through the first six innings holding the potent West Rowan bats to just five hits.

The Hickory Ridge margin was just enough as West Rowan mounted a furious rally in the bottom of the seventh inning, scoring six times on three hits and five walks. The big blow was a bases-clearing double by Yow while Parker Greene also drove in a run with a single. The rally fell short for West Rowan, however, as it left the winning run at the plate when Taylor Martin grounded into a fielder’s choice force at second with the bases loaded.

“I thought we had enough of a cushion but you never know,” said Hickory Ridge coach Patrick Helm. “It really was our best effort of the season. We were able to take good approaches at the plate, put some balls in play and score some runs. Plus Breezy pitched a heck of a game for us.”

West Rowan was coming off  what Yow called “…am awful loss” Monday at Cox Mill when the host Chargers rallied in the bottom of the seventh to win 6-5.  She felt it carried over into Wednesday’s game as the Falcons came out flat.

Hickory Ridge started with a bang, scoring two in the first on doubles by Gracyn Polk and Brittany Mast. The Ragin’ Bulls broke it open in the fourth with four more runs on four hits and a pair of West Rowan errors. The Bulls made it 8-0 in the fifth on RBI hits by Mast and Morgan Campany then added one more in the sixth on a double by Kaitlyn Macon and a bunt RBI single by speedy freshman Malaya Black.

“We started off so slow, six innings slow, ” West Rowan coach Jimmy Greene said. “Hickory Ridge really put the bat on the ball and we just could not put it together. We have just got to flush it because this is just a short-term issue. We can come together and turn it around for the long term.”

West Rowan will attempt to bounce back quickly with a game against last place SPC foe Concord this Thursday before heading into spring break.