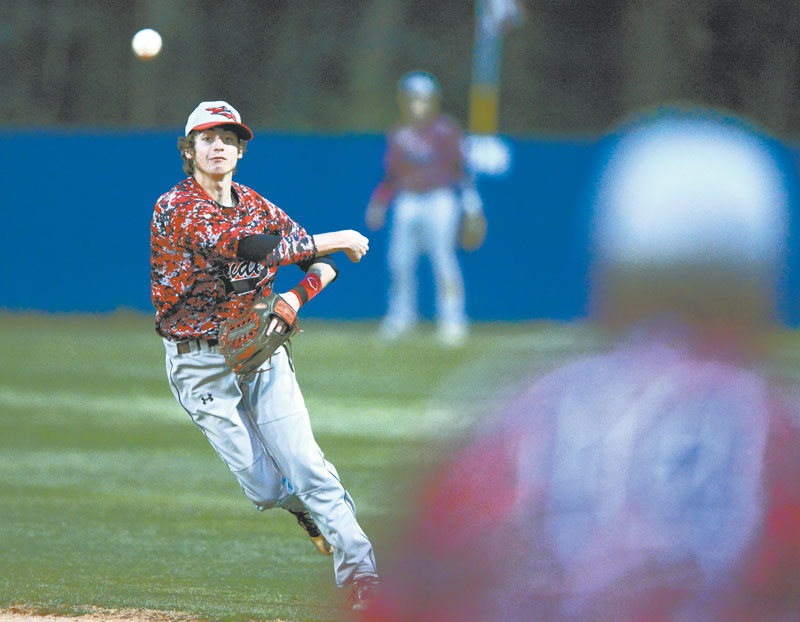 “They’re playing the kind of baseball East Rowan is supposed to be playing,” Hightower said. “They pitch it good, they play great defense, and they scrap for runs.”

The Raiders (8-1, 7-1 SPC)  rolled 5-0 and  stayed in first place in the league. It was significant that South Rowan, which played six of its first eight games at home, won at Staton Field, traditionally a tough place to play.

“We’ve been playing well at home, but this was a step forward for us to be able to play a solid game on the road,” South Rowan coach Thad Chrismon said.  “We prepared hard to play well. I thought our defense played exceptionally well early when Blake (Johnson) was trying to settle in and was having to battle.”

Johnson (3-0 this season and 10-1 in his varsity career) is a junior lefty. He located his fastball, mixed in an occasional curve and changeup and limited the Mustangs (7-5, 5-3)  to four hits.

“I just kept it low,” Johnson said. “They hit some balls hard, but our defense was excellent. We turned some big double plays.”

South Rowan didn’t muster a run-scoring hit but produced three runs on groundouts, one on an error and one on a wild pitch.

Chandler Corriher, who had three of the Raiders’ seven hits, started the game with an infield single. After a base hit by Peyton Penninger and a walk to Hunter Travis filled the bases, Bo Corriher and Eric Stowe plated runs with productive outs.

A diving catch by left fielder Chandler Antosek in the third was the highlight for the Mustangs.

Joseph Peeler (1-2) has made two straight starts in which the Mustangs  failed to score. South Rowan didn’t exactly smack him around, but the Raiders scored if they got men on.

“South had a good approach hitting against Peeler,” Hightower said. “They knew he’d be throwing hard. They were short and quick to the ball.”

South Rowan was 10-run-ruled at Staton Field by a conference-champion East Rowan team a year ago, but the Raiders won this time with relative ease.

“We just fed off each other and got momentum,” Chandler Corriher said. “We know Blake is going to get groundballs and flyballs. We just needed to do our jobs at the plate and in the field, and everyone did.”