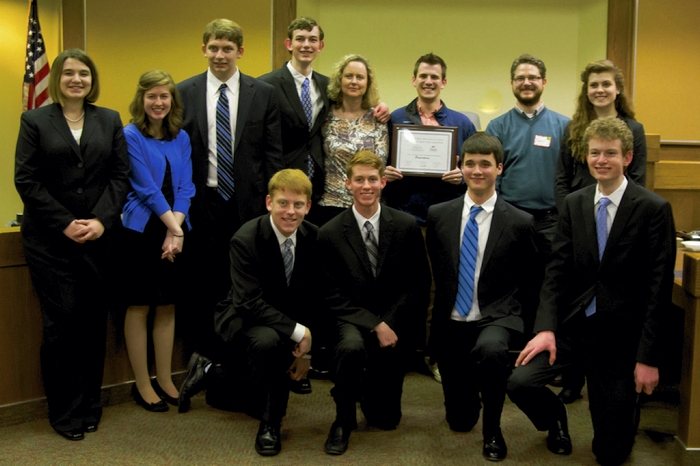 Eight local teens have been spending a lot of time in court lately, but it’s not because they’re in trouble.

The Blackstone Mock Trial Team, comprised of eight local homeschool students, won the High Point regional mock trial competition and placed fourth in the state for their skills in the courtroom. Last year, the team was the runner up in the regional division.

“One of their strengths is being able to take this beyond what you’d think a high schooler could do,” said attorney advisor Chris Sease.

The team was given a civil court case in September and met weekly throughout the year to study the case, learn the rules of evidence and develop the case for all different positions.

“We started getting into the really fine details,” said William Jones, a junior.

The students are assigned different roles – there are three attorneys, three witnesses and a timekeeper who also acts as a bailiff.

As the competition approached, the team began practicing twice a week and video conferencing on top of that to discuss the case. They also practiced in a courtroom three times, and local attorneys provided feedback.

During competition, the team is assigned either the prosecution or defense, and they argue that side against another team. In the next round, the teams switch sides.

Out of the 85 mock trial teams in the state, the eight regional winners moved on to the state championship at the Campbell Law School in Raleigh. Blackstone Mock Trial Team came in fourth of eight.

“They’re all more confident in their public speaking,” said Amy Prater, whose son is on the team. “They like to argue.”

“You have to be prepared with whatever they come at you with,” another mom, Lisa Davis, said.

“I helped found this team because I wanted to be able to learn more about being an attorney,” said Matthew Johnson.

Although Johnson has since decided he wants to pursue a career in dentistry, senior Blake Davis decided that he wants to go into law because of the mock trial team.

“I love being in a courtroom,” he said.

This year, Davis was awarded a scholarship through North Carolina’s high school mock trial association for team leadership. Every year, one senior in the state is selected for the award.