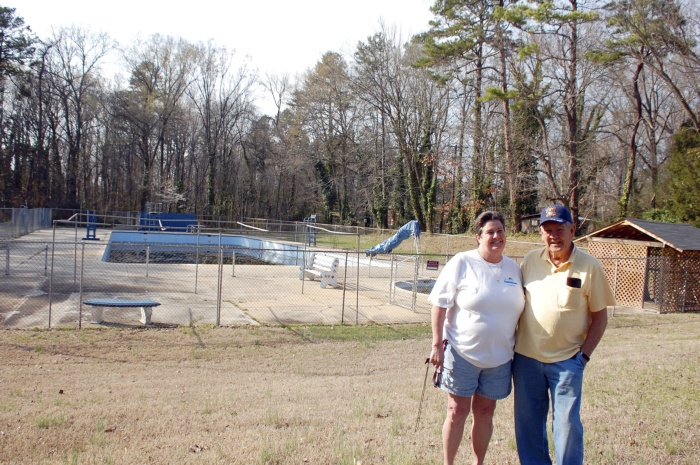 Mark Wineka/Salisbury Post Lynne Purvis and Howard Everhart stand outside Forestdale Pool in Spencer, which will be opening in late May for the 59th straight year.

SPENCER — Howard Everhart took his older brothers’ advice and bought shares in the Forestdale Pool when they were first offered. That was in 1956, when Howard and Diane Everhart were newlyweds.

It turned out to be a good investment. The Everharts can’t tell you how many summer days their children, grandchildren and great-grandchildren have spent at Forestdale Pool over almost six decades now.

Howard Everhart says he still likes to drop by to hear the splashing and laughter of all the kids, whether they’re related to him or not.

Buying stock in the Forestdale Pool in 1956 was really a no-brainer. Only 400 shares at $100 each were being offered.

Since then, hundreds of Spencer children have learned to swim at Forestdale Pool, while also making it their summer hangout. It was built on a 10-acre spot of land where Whitehead Avenue, Jefferson Street and Forestdale Drive all come together, and it’s just down the street from North Rowan High School, which was built a few years after Forestdale Pool was up and running.

In  the heyday of Forestdale Pool, it was lively and crowded. A sun deck on top of the bath house was a popular place to spread a blanket or set up a chaise lounge. Kids played the jukebox all day, played games on the lawn outside the pool, and their parents cooked out on grills set up among the trees and picnic tables.

They kids usually made their way to the pool on foot or rode their bikes. You could see Lynne Purvis’ house from the pool, and often she walked home for lunch while other kids packed sandwiches or brought change for the snack and drink machines.

“I think we all lived at the pool till our hair turned green,” says Purvis, who is now the pool’s president.

As with many private, neighborhood pools built in this era, membership has evaporated over time. Many of the original families aged out, the railroad left town long ago and more people built or installed pools in their own backyards.

Last year, Forestdale Pool had 31 families participating, “which really put a hurting on us,” Purvis says.

For this year only, new members can join Forestdale Pool for $250 — a special price that covers a whole family. Usually, the annual cost is $300 for dues and $50 more in assessments.

Keeping a private pool open and operating isn’t cheap. Property taxes are roughly $2,600 a year. Other expenses include chemicals, water, paying for lifeguards and painting the pool every other year.

The start-up chemicals alone for each new season run $1,100 to $1,200, and the every-other-year painting of the pool costs about $800. Just to fill the pool with water every spring costs roughly $750.

Purvis says it’s surprising, but there’s a whole new generation of folks in Spencer and Rowan County in general who don’t know the Forestdale Pool exists.

“We want people to know it’s here,” she says.

The founding members and board of directors for Forestdale Pool sounded like a Who’s Who of Spencer from generations past. J.H. Steelman was president; Ethel Miller, vice president; and Neil Hatley, secretary-treasurer.

The Forestdale corporation formed in late 1955, and construction of the $32,000 pool was completed the following summer. The pool opened in August 1956.

Paddock Engineering was the contractor, and it said the Forestdale Pool — guaranteed for 20 years not to leak — was the first in the area to use a “Gunnite cement process.”

A newspaper account said the pool’s concrete was blown in without forms.

Whatever they did worked, Purvis says, because the pool itself has had no major repair issues as far as she knows.

Everhart says he recalls that J.A. Wilson built the bathhouse right after the pool went in. Tennis courts were in the original plan for the private club, but they never were constructed.

Some of the people most associated with Forestdale over the years include Marsha Woods, a longtime pool manager; lifeguards Kayla Morgan and Kayla Overcash; and swim instructors Amy Smith and Clyde Miller.

Purvis taught swim classes at Forestdale for about 10 years, and now some of her little students are in college.

Purvis’ husband, Neal, serves as the pool maintenance guru. “We try to keep on top of it,” Lynne says.

The season at Forestdale Pool generally runs from Memorial Day to Labor Day. The pool will be open Memorial Day weekend and the weekend of May 30-31. The pool opens full-time the day after school ends for the year.

Concession offerings are a bit more elaborate these days with items such as pizza, corn dogs, macaroni and cheese, chips and Slushies.

Everhart, well-known throughout Spencer from his days as a mail carrier, can’t say enough good things about Forestdale Pool and that original investment in shares he made back in 1956.

“It has been a godsend for my kids,” he says.