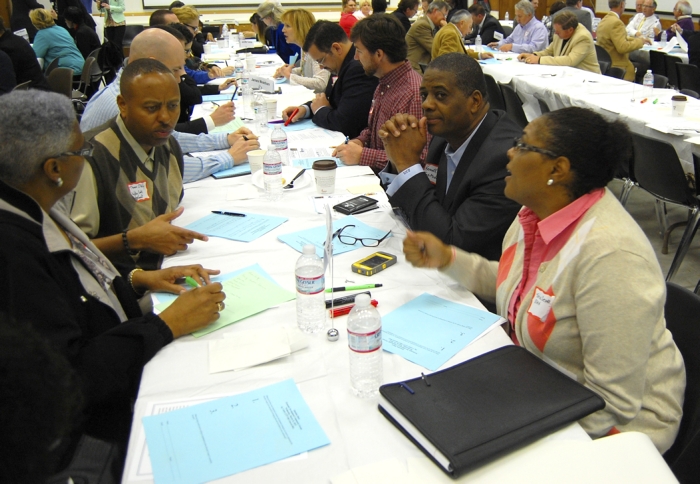 Groups discuss what they think are the most important issues the county needs to addres during Wednesday's community forum on economic development.

Rowan County can look to other counties in the state for ideas on how to move forward with economic development.

During Wednesday’s economic development forum at the county’s Agricultural Center, presentations on efforts in four other counties were given.

One thing Robert Van Geons, executive director of Rowan’s economic development commission, has stressed is the need to build large, industrial shell buildings that are ready for companies to move into.

Cleveland County has done this, from start to finish, and is now seeing the positive results, according to Kristen Reese, director of Cleveland’s Economic Development Partnership.

The county and Shelby, the county seat, partnered to develop an industrial park — called the Foothills Commerce Center. Then, they went a step further and built a 100,000-square-foot industrial facility that was state certified for industrial use.

The building was sold for $2.7 million — earning a profit — and a company moved in. A second shell building was built and a developer is ready to purchase it once a company agrees to move in, Reese said. Money from the sale of the first building went toward building the second one.

Meanwhile, another company built its own facility in the park.

The site development started in 2009. Reese said the whole process took a lot of time, work and, most importantly, cooperation from all of the parties involved.

She said companies want to see that communities “have some skin in the game.”

Reese said a total of 489 jobs have been created and there’s been $60 million of capital investment from companies. She added that private developers have expressed interest about building shell buildings in the park.

in Burke County, 230 people have graduated from a workforce program that is a partnership between the county’s economic development group and local businesses.

Called RENEW — Re-Educating a New Employable Workforce — the 96-hour training program offers certified training for under employed and unemployed people based on curriculums set by industries.

The local community college, Western Piedmont, is also involved with the program, which has received grant funding.

Officials said the program has had continued success because the business community is continually asked what skills they need in employees.

Finally, a partnership between Monroe and Union counties has led to the region turning into a hub for the aerospace industry.

Called “cluster development,” the process is about bringing companies that work in a specific industry to the same area.

Christopher Platé, executive director of economic development and aviation for the two counties, said the process started in 2002 and included recruitment, branding — such as changing the airport’s name and hosting air shows — and planning the airport like and industrial park.

After six years of work dealing with the federal government, Platé said, a customs facility was approved for the airport — to allow international flights into the airport and better access to foreign companies.

The area now has several companies that make products for the aerospace industry.

Like in Burke and Cleveland counties, Platé said the communities had to buy into the goal and work together before success was realized.