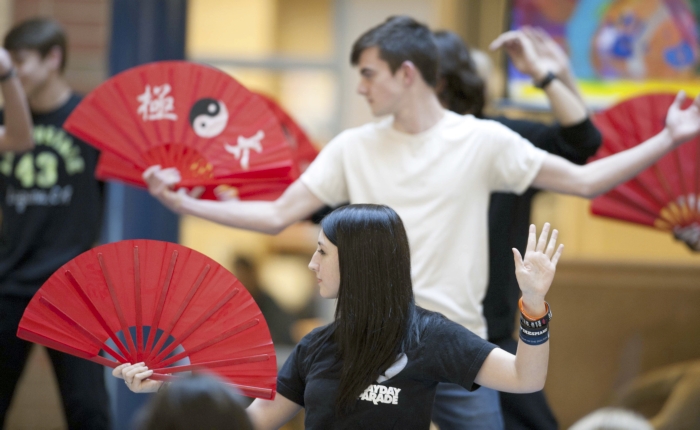 Students at Carson High School didn’t have to get on a plane to explore China, Greece, Mexico or France.

Smith was one of Riley’s art students, and when she became homebound, he helped her continue her education.

“I want to go back to the school and see my friends and the teachers one last time,” Riley recalls her saying.

She passed away last summer, but not before she was able to come back to Carson to enjoy Cultural Eve along with her mother and sister.

The tradition continued this year, and Carson students used the event as an opportunity to raise funds for The Sandbox, an organization that serves families whose children have been diagnosed with cancer or another life-altering illness.

Smith’s last two paintings, which she co-painted with her sister, were also on display at the event.

Brightly colored chalk art greeted visitors as they walked up to Carson. Salutations in different languages and whimsical designs celebrating culture and diversity decorated the sidewalk in front of the school.

Inside, an engaging performance went on throughout the night.

“We have so much talent here,” Riley said. “We should go ahead and showcase that.”

He added that the performances help spark the interest of those who aren’t involved in the arts at Carson.

While the groups performed, students and parents sampled multicultural foods from the tables that surrounded the space.

Denice Traina and her daughter, Catherine, manned the Greek booth, fitting, since they come from a Greek background.

Riley asked Catherine if she would take on the Greek table after he noticed her eating Greek food in his class, Denice said.

She added that everyone responded well to the Greek foods they prepared.

In addition to samples of Chinese foods, students and their families were able to try their hand at chopsticks at the Chinese table. A plate with chocolate candies was set out with chopsticks so people could try to pick up and move the pieces.

“It teaches you a little bit about every country,” said student James Keopaseut, Jr.

At one booth, students were able to make flowers from tissue paper, and there was face painting at another table.

Abi Smith, a ninth grader, brought in macaroons for her French class’ table.

“I just wanted to learn more about other cultures,” she said, adding that her favorite part of the program was the dancing.

Hosting an event like Cultural Eve shows that Carson is different from other schools because it showcases their talents in the arts, Smith said.