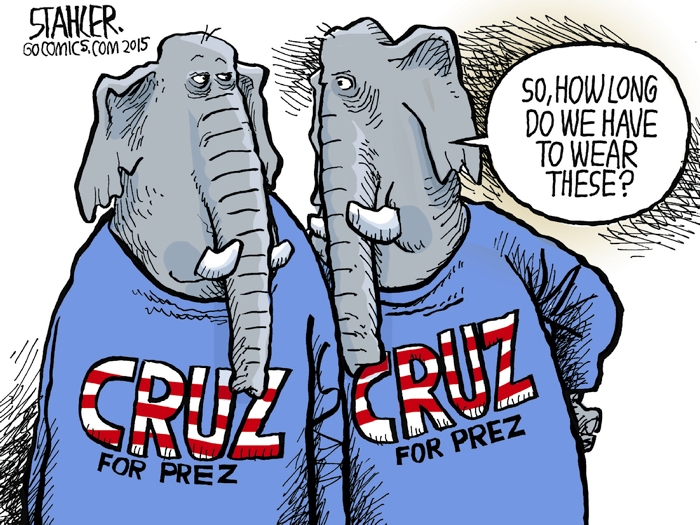 “In your heart you know he’s right,” was Barry Goldwater’s presidential campaign slogan in 1964.

The critics of Sen. Ted Cruz (R-TX), who announced Monday he is running for president, are effectively saying of him: “In your head you know he’s nuts.”

Even before his announcement, Cruz was labeled with the typical modifiers the left uses to scare people who don’t pay much attention to politics — extreme, far right, out of the mainstream.

In the run-up to the next election, the left and their media colleagues will try to fool Republicans into nominating a mushy moderate from the party’s establishment wing. You know, someone like “President John McCain,” or “President Mitt Romney.” They know that if the GOP falls for this line again, conservatives will stay home and Hillary Clinton will be the next president.

What the establishment and the left really dislike about Cruz is that he paints in bold colors. You know where he stands, whether or not you agree with his positions. There is little chance Cruz will say one thing on Monday and reverse himself on Tuesday to placate a different audience. Weak men fear strong men (and strong women) because the strong expose their weakness. Better for the weak to eliminate the strong and hide among other weak people.

Cruz will face a problem similar to that of a TV evangelist: competing for dollars and votes from a fixed number of voters. When Sen. Marco Rubio (R-FL.) and Sen. Rand Paul (R-KY.) jump into the race, perhaps followed by Mike Huckabee, Rick Santorum and Dr. Ben Carson, all will seek money and votes from the same donor pool. None of these men knows how to unite conservatives much less the independents that those experienced in politics believe one must attract to win.

Here’s some advice, not only for Cruz, but for the other would-be candidates: Instead of nonstop attacks on President Obama, adopt a positive and future-oriented agenda.

Cruz and the other candidates can start by considering some uplifting new videos created by Bob Woodson, president of the Center for Neighborhood Enterprise and Rep. Paul Ryan (R-WI.), who recently accompanied Woodson on a tour of some of America’s poverty pockets. They spoke with people once considered beyond redemption, but who have turned their lives around.

The result is a just released seven-part online video series called “Comeback” (www.opportunitylives.com/comeback/). The series highlights stories about drug addicts, alcoholics, abusers, gamblers, prostitutes and others, who with inspiration, motivation and perspiration are now inspiring others to pull themselves up and out of dire circumstances without help from the government. In fact, some of those interviewed say they had been through many government programs and that none of them helped.

While “Comeback” is partly Ryan’s brainchild, the series is not about him, or Republicans. It’s about overcomers who do the work necessary to escape poverty and addiction. The trailer concludes with this question from Woodson: “What do you think is the answer to poverty? Well, let me show you what I saw.”

There isn’t a one-size-fits-all answer to poverty and the videos show people addressing different challenges in creative ways. These approaches should not be the exclusive property of one political party or candidate. Focusing on what works is better than ideological bomb-throwing, as even Hillary Clinton suggested in recent remarks.

Woodson and Ryan have created something that could shift the political debate for 2016, if Cruz and the other candidates listen and get the attention of those voters who are disgusted with a dysfunctional and costly federal government.