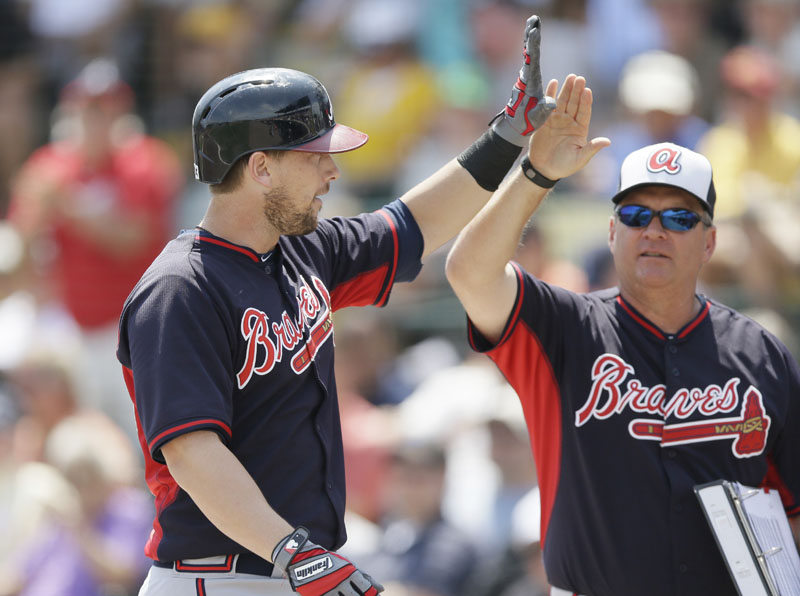 Atlanta's Chris Johnson, left, is congratulated by hitting coach Kevin Seitzer after hitting a two-run home run Thursday in the first inning of a spring training game against the Pittsburgh Pirates in Bradenton, Fla. The Braves defeated the Pirates 7-5.

BRADENTON, Fla. (AP) — Josh Harrison led off the game with a home run that ended Wandy Rodriguez’s scoreless streak at 12 innings, and the Atlanta Braves beat the Pittsburgh Pirates 7-5 Thursday.

Chris Johnson had three hits, including a two-run homer that capped a five-run first inning against Vance Worley, a drive just fair down the left-field line.

After the Pirates tied the score, Jonny Gomes hit a go-ahead home run in the ninth against Clayton Richard and Jesus Flores had a run-scoring infield single.

Rodriguez allowed four runs and eight hits in five innings. Worley retired 13 in a row after Johnson’s homer and wound up giving up seven hits in six innings

Walker doubled and scored on Andrew McCutchen’s single in the third inning, then homered in the fifth. Francisco Cervelli hit an RBI double.

At spring training with a minor league contract, the 36-year-old Rodriguez appears to have earned a spot in Atlanta’s starting rotation. He gave up a run in his first inning this year against the New York Mets, then blanked Washington (three innings), Houston (four innings) and Miami (five innings).

“We have some familiarity with him,” Harrison said. “He was with us for a couple of years and before that we faced him a lot.”

Braves: Rodriguez went 0-2 with a 6.75 ERA in six starts last season before he was released by the Pirates. He had surgery on his right knee in July, then signed a minor league contract with the Braves in January.

Pirates: Worley almost certainly has won the lone open rotation job. He was not surprised by his rough first inning against the Braves.

Pirates: Andrew McCutchen turned up without his signature dreadlocks, which were cut off Wednesday. The locks will be auctioned, and the proceeds will go to Pirates Charities.

“I know I’m going to feel a little faster without all that hair,” McCutchen joked. “Now I can be like all the rest of the guys on the team and get a haircut every two weeks.”