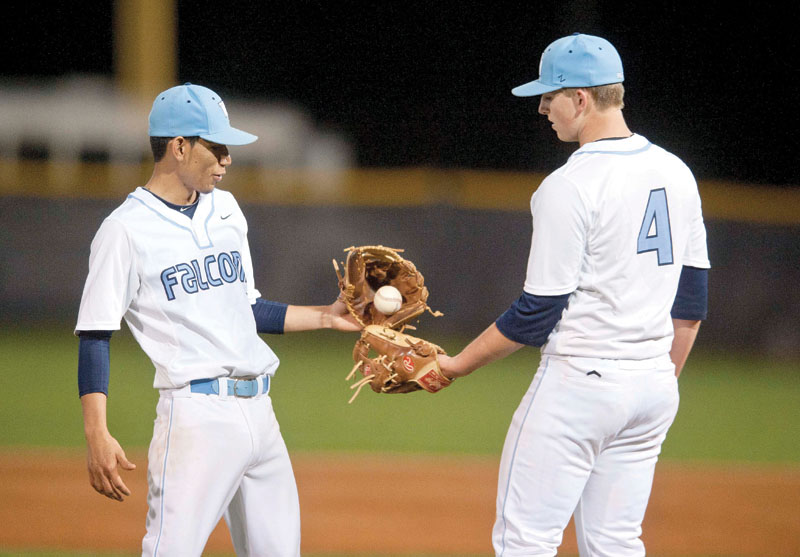 “I like to get it done quickly,” Bautista said after West Rowan (8-3, 5-3) reached the season’s midpoint tied for third place in the league standings. “If possible I like every inning to be 1-2-3. But mostly I was just doing my job, trying to pitch my game.”

Bautista (3-0) pitched like he had a bus to catch, delivering only 71 pitches in a tidy, six-inning effort. He yielded six hits — three came in the top of the sixth — struck out eight and walked one.

“He had mound presence,” said West Rowan coach Seth Graham. “He located. He worked the strike zone. And even when he fell behind he wasn’t giving in.”

“That’s been the story for him all year,” said Bulls’ assistant coach Cory Childress, who was subbing for head coach Branden Knapp. “He did a great job. He got ground balls. The reason we lost is we committed five errors.”

West Rowan took a 1-0 lead in the bottom of the first, when Harrison Baucom smoked a leadoff double to center field, reached third base on an error and scored when teammate Hunter Bernhardt paddled a 2-2 pitch into left for an RBI single.

“I was always sitting first-pitch fastball, but (Hathcock) came in with the curve a lot,” said Bernhardt, the Falcons’ designated hitter, after collecting two singles and reaching base three times. “Then with two strikes I widened my stance and put some contact on the ball.”

Two innings later it was 2-0 West Rowan. Bernhardt grounded a leadoff single to left and advanced all the way to third when Kacey Otto reached on an infield error. He scored when Tyler Poteat lofted a sacrifice fly to left field.

“I was going as soon as I heard the ball pop in (Jordan Short’s) mitt,” Bernhardt said.

West Rowan’s final run came in the last of the fourth. Caleb Link got on base on yet another Hickory Ridge miscue, stole second, broke for third on a passed ball and crossed home when catcher Cory Delair’s throw sailed into left field.

The guests scored their run in the sixth, when Jack Whitcomb whipped a leadoff double down the left-field line and crossed the plate on Nick Ryan’s one-out single to center.

Bautista escaped further damage — and a second-and-third jam — when he recorded a strikeout and induced an inning-ending groundout. Reliever Austin Love pitched a perfect seventh to seal the deal.

“It was a show, wasn’t it?” Bernhardt said. “(Bautista) threw it hard. He threw it low. He located when he had to. And his curve was nasty. They couldn’t touch it.”

Most importantly, Bautista kept the Falcons in the race for the SPC title.

“Every time he goes out there, we have a chance,” Graham said. “I wish we could have hit the ball a little better. But with Omar on the mound,  we always know he’ll keep us in the ballgame.”