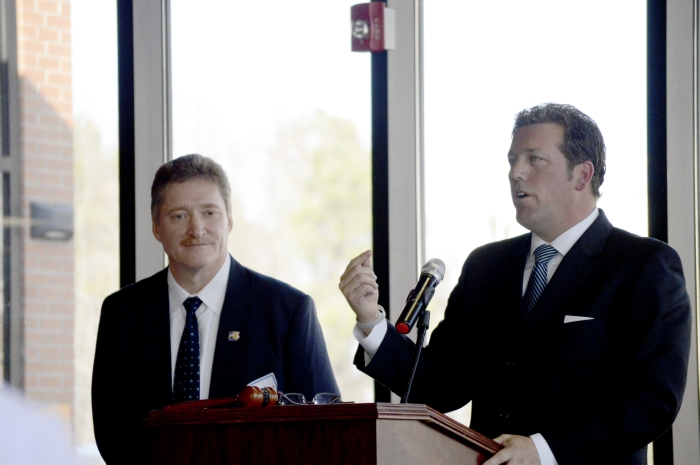 Fisher, an F&M Bank executive, was named the new president of the Rowan County United Way during the agency’s annual meeting on Tuesday. Following the completion of a $1.97 million fundraising campaign, Fisher expounded on goals for the agency’s future. He joked that he wanted to be like basketball legend Michael Jordan and previous United Way President Mike Williams.

Fisher continued, saying Jordan was a highly skilled basketball player with a passion for the game. He said Williams, as the previous president, is similar.

“Under Mike’s leadership, we did a couple of great things this year,” Fisher said. “We’ve added a new agency for the first time in a long time. We have a new grantee agency in Smart Start Rowan and we’re finally going to start addressing literacy in our community at the pre-school level, which is so critical. By the time they get into school, it’s too late, folks.”

“You want to know your dollars are going where they’re supposed to be going,” Fisher said. “And, you want to know they’re being spent the best they can be spent.”

Fisher said as the incoming president of the Rowan County United Way, he only has one goal.

Fisher’s short speech came at the end of the annual meeting where the United Way’s board members and directors handed out awards for donors and participants in the 2014-2015 fundraising campaign. The fundraising effort, led by the previous campaign chairman Greg Dunn, surpassed its initial goal by over $100,000.

One of the top honors handed out on Tuesday — the Helping Hand Award — was given to Marcie Puckett of Freightliner. The award recognizes a specific individual for outstanding service to the United Way of Rowan.

During the award presentation, Williams said Puckett is always willing to help and has a positive attitude. Puckett’s campaign has a 148 percent increase, Williams said.

Individual agencies were also honored during the annual meeting. Awards went to:

The Rowan County United Way is one of more than 1,000 local branches of the national organization. The United Way raises money to help with important local issues, such as literacy.

Salisbury woman taken to hospital after car crashes through…