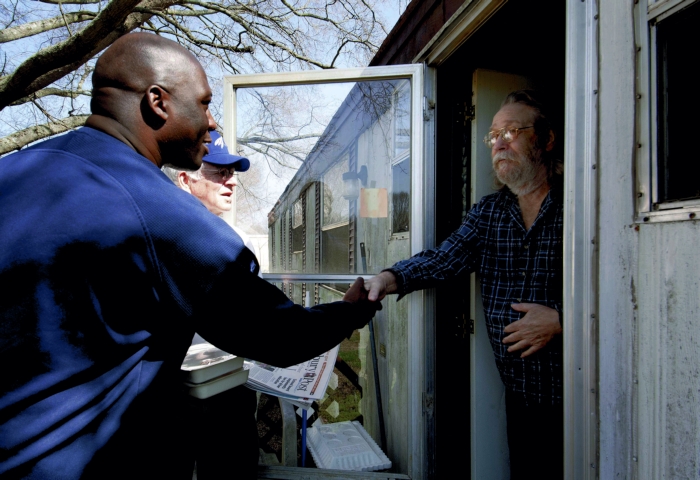 As part of the nonprofit’s March for Meals campaign, the coaches were asked to lend their time to the cause in Rowan County. The coaches were Catawba College Head Coach Curtis Walker, Carson High’s Joe Pinyan, North Rowan’s Joe Nixon and East Rowan’s Ken McClamrock.

Meals on Wheels delivers hot meals daily to people, mostly senior citizens, who have trouble getting around. In Rowan County, 414 people were served last year, according to Rita Sims, executive director of Rowan County Meals on Wheels.

The coaches delivered meals with regular volunteers. Walker was with Jim Lyerly, who said he’s been volunteering with Meals on Wheels for 20 years.

Walker, Catawba’s head coach for the last two seasons, said he wanted to do his part and that he’s always looking to help out.

Walker played for Catawba from 1989 to 1992 and said supporting the community is a vital part of his team’s role off the field, adding the team has a partnership with the county’s schools mentoring children.

Walker got a big “thank you” from Lee Stamper, who said he was a Catawba fan, after delivering his meal.

It’s means a lot to “give back,” to the community, Walker said.

Since late 2013, Meals on Wheels in Rowan has been based in a building off South Salisbury Avenue in Spencer. The organization is raising funds to put a kitchen in the building so the meals can be prepared on site. Currently, meals are prepared at CJ’s restaurant in Cleveland and Jimmie’s in China Grove.

Sims said having their own kitchen will help cut costs and allow the organization to be more efficient.

She said Meals on Wheels is more than just a hot meal.

“I see the differences we make in our clients’ lives,” she said, adding she’s seen the empty cupboards in people’s homes.

“If you deliver meals one time, you understand exactly why we do this,” she said.

Sometimes, she said, it’s that friendly visit during the day that is the most important thing. Checking on people is vital, and there are times when volunteers come to a home and find the person is in distress — they may have fallen and can’t get up.

Lyerly said it’s nice seeing the people on his route, and that he’s made friends over the years.

“It’s a need” he said about the program. For some people, he said, a Meals on Wheels volunteer is the only person they see each day.

Rowan’s Meals on Wheels started in 1976 and has 27 daily routes. More than 1,000 volunteers are involved with the program in Rowan.

A fundraiser, “Itchin’ For a Kitchen,” will be held May 2 from 5:30 p.m. to 10:30 p.m. at the F&M Trolley Barn in Salisbury to raise money for the kitchen. Sims said the event will be like a “taste of Rowan” and that local restaurants will be serving food. There will also be music and dancing.

The Kentucky Derby is that day and there will be a Pre-Derby Party at 5:30 p.m. and the race will be shown on large screens.

Tickets are $60 a person or $100 for a couple. For more information or to buy tickets, call 704-633-0352. People can also go to www.mowrowannc.org to learn more about Rowan County Meals on Wheels.