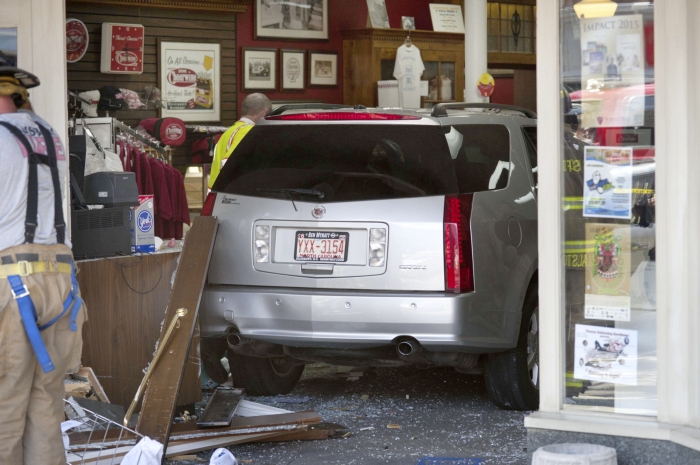 JON C. LAKEY / SALISBURY POST A Cadillac SUV jumped the curb and crashed into Innes Street Drug Co. on South Main Street in downtown Salisbury on Tuesday afternoon. The vehicle drove completely into the building and briefly pinned a customer in the wreckage. The customer was freed and loaded into an ambulance with unknown injuries. The driver was not injured.

A Salisbury woman was taken to the hospital with unknown injuries after she was struck by an SUV that crashed into Innes Street Drug on South Main Street. Terry Cuthbertson, 47, was temporarily pinned between a store shelf and underneath the vehicle’s front bumper.

Fire officials stabilized the vehicle and Cuthbertson, of the 300 block of Lloyd Street, before placing the vehicle in neutral and rolling it back about two feet, said Fire Chief Bob Parnell.

Parnell said her leg was pinned back under the bumper. The initial call came in at 3:24 p.m. as a single vehicle crash and shortly thereafter the call was upgraded to a person pinned and it became a rescue assignment, he said.

Salisbury Police say it appears Mary Archie, 61, of the 300 block of Ashbrook Road, was backing out of a parking space in front of the Innes Street Drug and meant to brake but instead accelerated, went over the curb and crashed through the storefront. The vehicle, a Cadillac SRX, ended up fully inside the store.

Archie told a Post reporter she intended to back up and believed the car was in reverse, but doesn’t know what happened. She and her friend and the friend’s daughter were leaving Innes Street Drug.

“The car lurched forward. The next thing I know, I was inside the drug store,” Archie said.

She said her friend, who was in the car, told her she saw the car slip into gear.

She said she was very concerned about Cuthbertson. Archie said she asked emergency responders to check her blood pressure, which she said was fine. Responders said Archie was understandably shaken immediately after the crash.

Firefighters on the scene said there didn’t appear to be serious structural damage to the store. Parnell said no load bearing areas of the structure was damaged, but officials called in Chris Branham, head of the city’s code enforcement, to verify the structure.

David Leach said he was standing outside the drug store talking to friend and local artist Joseph Heilig when they saw the crash.

Leach said he saw the vehicle roll onto the sidewalk. Leach said he thought she would stop, but the driver continued into the building.