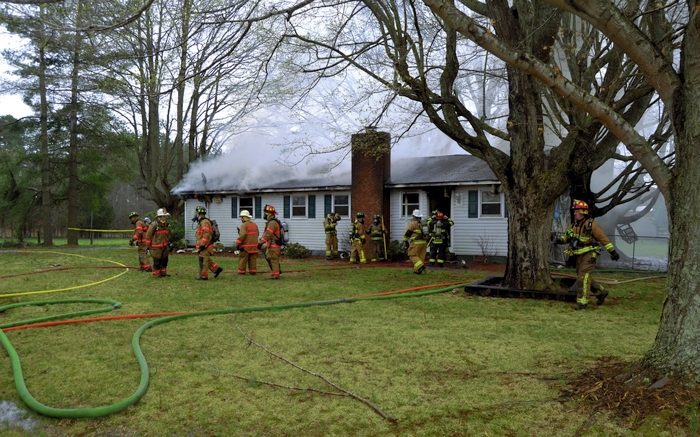 Multiple fire departments responded to this mobile home fire at 1475 Godbey Road where the tenant had left several minutes before the fire was reported. The fire occurred around 9 a.m. and began in the kitchen, located on the right side of the home, but no cause has been determined yet. Shavonne Walker/Salisbury Post

Multiple fire departments responded to a mobile home fire at 1475 Godbey Road, which had flames coming from the front and back door when responders first arrived.

The renter was not present at the time. Fire officials said she left several minutes before the fire was reported. The fire started in the right side of the home where the kitchen is located, but it is not clear at this time what caused the fire, said Woodleaf Fire Chief Artie Watson.

The fire was initially reported around 9 a.m. and fire crews made a quick response. Watson estimates the house may have been burning for at least 15 minutes before the crews arrived.

Watson said firefighters went inside the mobile home, but quickly backed out, instead going from a defensive mode because there was concern the roof would collapse with the amount of fire inside. Firefighters continued to put out hot spots and had to put a hole in the roof to vent the structure.

The fire burned a hole in the right side of the home’s roof.

The fire spread into the attic and then moved suddenly throughout the rest of the home.

The fire was under control within 45 minutes, but firefighters continued to put out hot spots.

The Hanford Dole Chapter of the American Red Cross is assisting the tenant.