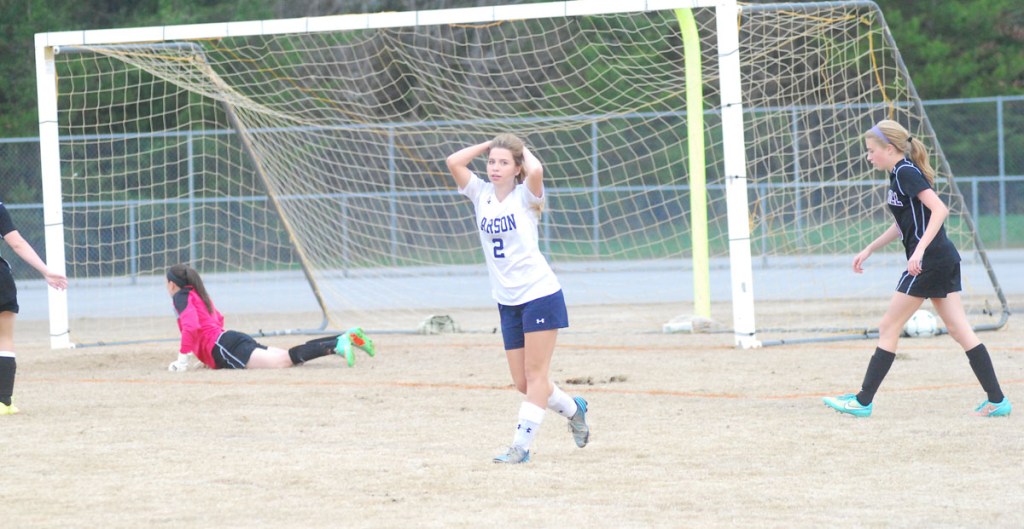 ADAM HOUSTON/THE SALISBURY POST Carson's Cierra Josey (2) reacts after a shot went just wide near the start of the second half Wednesday during a South Piedmont Conference game at Carson. The Chargers defeated the Cougars 5-1.

CHINA GROVE — Thanks to an own goal, Carson held a 1-0 halftime lead over Cox Mill in a South Piedmont Conference showdown at Carson. Cox Mill’s Taylor Koenig deflected the ball into the net on a shot by Cassie Howard with only 2.7 seconds left in the first half.

The Chargers, which dominated possession in the first half, came right back with five goals in the second half for a 5-1 victory. The Chargers were led by two goals from Sarah McHale and a goal apiece from Jessica Fail, Madison Greenhall and Shayna Wolery.

The loss, the second in three days, dropped the Cougars (6-2, 6-2 SPC) into third place in the SPC standings, a game behind Hickory Ridge. Carson lost 2-0 on Monday to the Ragin’ Bulls on the road.

“Both of these games have been fairly equal,” Carson head coach Lauren West said. “The Hickory Ridge game, I would say the score is not reflective of how we played on the field. The problem is we weren’t able to finish our chances that we had.

“…As a team, we’re trying to build on finishing. That’s definitely on top of the list for us.”

The Chargers were in control of the first half, but they owned the second half.

“I think the girls just came out in the second half and ready to work,” Cox Mill head coach Kellie Pierrot said. “They came out looking to connect.”

Early in the second half, a challenge by Carson goalkeeper Megan Bolick took out Cox Mill’s Jessica Fail. A penalty kick resulted from the play. Sarah McHale’s attempt made it past Bolick to knot the game at 1 with 33:45 left on the clock.

Less than a minute later, Fail gave the Chargers what turned out to be the game-winning goal.

“I don’t necessarily think it was that [sequence that led to a loss],” West said. “We just started making little, small mistakes, and they started to capitalize on that. They’re a very good team, very strong team and very technical, and then when you make small mistakes, they are the type that will run on it and make you eat it.”

With the clock winding down and the Cougars still trailing 2-1, the Chargers had the ball in the Cougars’ zone. Carson’s Montana Gurganious mishit the ball, and it wound up at McHale’s feet. She went straight to the goal and put the ball by Bolick for the first of her two goals and a 3-1 lead at the 5:01 mark. That score essentially sealed the win.

Bolick, despite giving up five goals, had a good night in the net. She took the ground plenty of times for a diving save or to smother a loose ball.

In the first half, a shot by Cox Mill’s Jaden Baughman hit the right post and deflected toward the center of the box. McHale fired the ball at the net from close range, but Bolick came up with the diving save.

“She’s a phenomenal keeper. We had several games before Hickory Ridge where we didn’t even get scored on,” West said. “She was challenged, but this has been the challenge. These past two games, she’s been able to show her talent and how phenomenal she is.”