Economic development expert: Having a plan and executing it is key to success 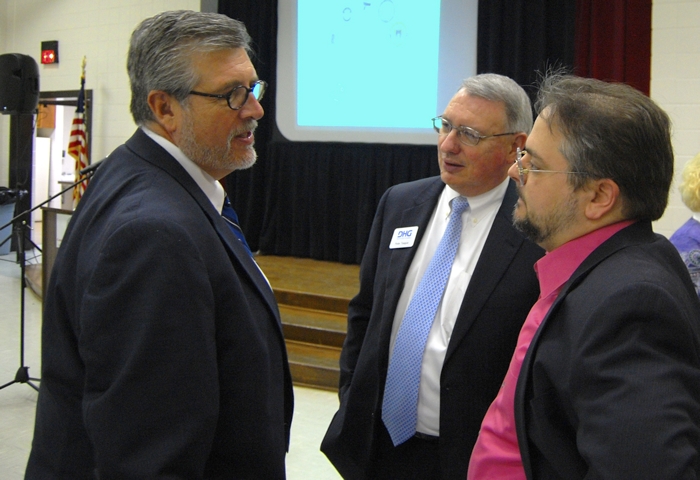 The keynote speaker for the community forum on economic development said it’s vital to create a vision and do what you can with what you have.

Ted Abernathy, an expert in economic development trends, addressed a packed room at the Rowan County Agriculture Center Wednesday morning. He touched on topics including global economic trends, the rapid advances in technology, and what communities should do to be successful in a globalized world.

Everyone is trying to figure out what to do in a world that is changing rapidly, he said, adding there is a coming “jobs war” — there are a billion more people in the world looking for work than there are jobs.

Nationally, from a production standpoint,  America’s economy is “humming along,” Abernathy said. Jobs are being created, but the problem is there aren’t enough good-paying jobs.

Wage disparities are a problem that needs to be addressed, he said.

Talking about economic development, Abernathy said communities that have a plan and follow through on it will be successful.

He stressed collaboration among the various interests in a community, from businesses to governing bodies — without partnerships, nothing will be accomplished.

“You can’t have it all” at once, he said about strategic planning. Communities need to understand what resources they have, what they’re good at and where they want to go.

A plan has to be drilled down to specifics, he said, it’s crucial to know what you’re good at now and find a competitive differentiation.

Abernathy, an Eisenhower Fellow for global economics, said everybody wants to have advanced manufacturing, but it can’t be everywhere, so communities must have a plan of action if they’re going to see any results.

Create a vision, articulate the vision and drive it to completion, he said.

Companies eliminate places until there’s one left, he said, so communities must know what they have to offer and where they need to improve. And it’s a data driven process, he said.

Developing a strong workforce in a community is crucial, Abernathy said, adding that by 2022, over 70 percent of the jobs will not require a bachelor’s degree.

But a high school diploma won’t cut it either. Companies need workers who have job-specific skills, can pass a drug test and a background check, and are dependable, he said.

He also said more and more people will be self-employed in the future.

Abernathy said he’s unsure if the country can keep up with the demand for skilled workers, adding it’s likely robots will replace humans in a variety of job sectors.

Technology and the Internet have changed everything, he said, and the pair will change everything again.

Talking about incentives to recruit business, Abernathy said if you don’t have them you’re not going to be a part of the large deals. And small cities like Salisbury will have to compete with places like Charlotte when recruiting business.

The bigger the area, the faster it’s growing, Abernathy said.

Urbanization is not going to stop, he said. And changing demographics, white people will be a minority group in America in a few decades, will bring change, too.

To survive economically in the future, people and communities will have to be constantly learning, he said.