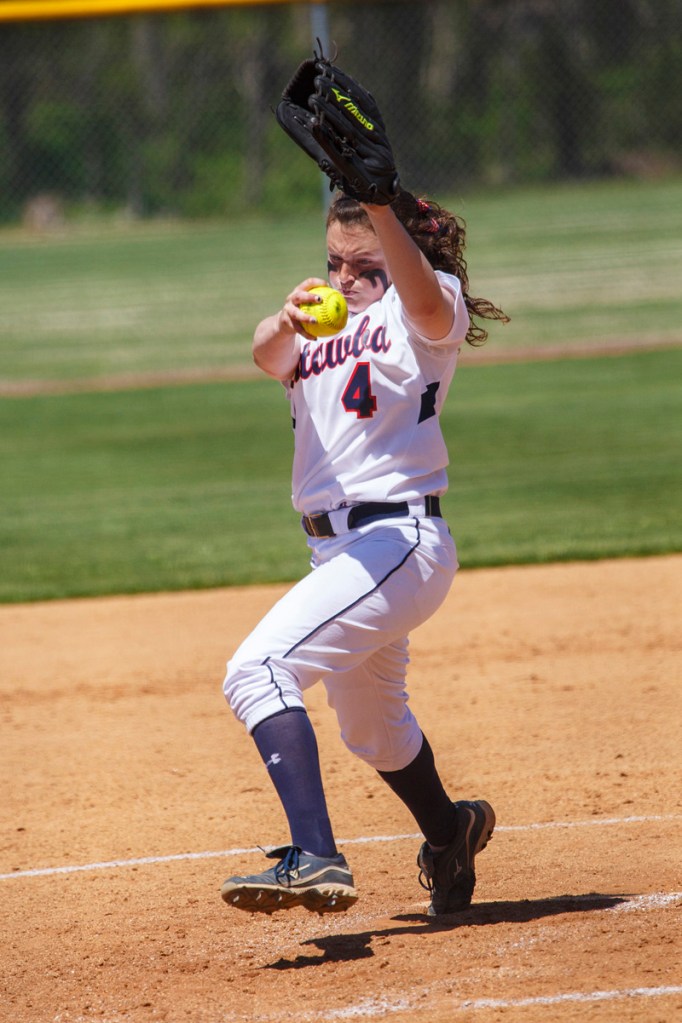 Courtesy of Catawba Athletics Catawba pitcher Carley Tysinger, shown pitching in 2013, now holds the school record for strikeouts in a career. She passed previous record holder Lindsey Ettinger with a strikeout in the bottom of the first inning Monday in the Indians' win at Belmont-Abbey. Tysinger struck out nine to move her mark up to 729 for her career.

SALISBURY — Etching her name into the Catawba softball record book was not even on pitcher Carley Tysinger’s mind when she stepped into the circle Monday against Belmont-Abbey.

If there was any pressure to move to the top of the school’s list for career strikeouts by a pitcher, she didn’t feel it. It was just another game to be pitch and another trip into the circle.

“Right before the game, [coach Nan Whitley] was like, ‘You know what, Carley? It doesn’t even matter. Just go out there and have fun and do what you know how to do,'” Tysinger said. “I was like, ‘All right.’ …It was kind of like the same.”

Tysinger struck out Anna Mixa for the final out in the bottom of the first inning to move past Lindsey Ettinger’s school record of 720. Tysinger fanned another eight batters to move her mark up to 729. The junior pitcher’s goal is to move up to 1,000 by the time she graduates.

Tysinger averages eight strikeouts per game for the 11-11 Indians. She has logged double-digit strikeouts this season in seven of her 14 appearances in the circle. Only once — the first game of a doubleheader Saturday against Carson-Newman — has she failed to fan a single batter.

Striking out batters is something she is obviously good at, but it is not her priority. Tysinger just wants a batter to find herself on the bench instead of on base.

“I don’t care how it comes,” Tysinger said. “As long as it happens, then it’s OK with me.”

Tysinger is no stranger to being breaking a record. Pitching in the first round of the 2014 South Atlantic Conference tournament, she fanned an NCAA Division II national record 27 batters on in a 16-inning marathon against the top-seeded Lenoir-Rhyne Bears. She threw more than 250 pitches in the Indians’ 6-3 upset.

Tysinger said her legs were sore the next day and shoulder was so swollen, nobody could see the shoulder blade.

The record didn’t last long. Eight days later, a pitcher from the University of Indianapolis struck out 30 in a 13-inning game.

Setting a new school mark was nice, but Tysinger was more pleased the Indians picked up a 4-0 shutout than she was to move herself to the top of a statistical category. She is about the team and not individual accolades.

Tysinger was not at all miffed she was placed on the second-team pitcher on the preseason All-South Atlantic Conference team. This came a season after she was a first-team Daktronics All-Region. She said it as only the opinion of other people and didn’t matter much to her.

“That’s not going to change the type player or who I am, so I’ll just work to do what I think I need to do and what the team needs me to do,” Tysinger said.