College basketball: Tar Heels set to battle in Badgers’ home away from home 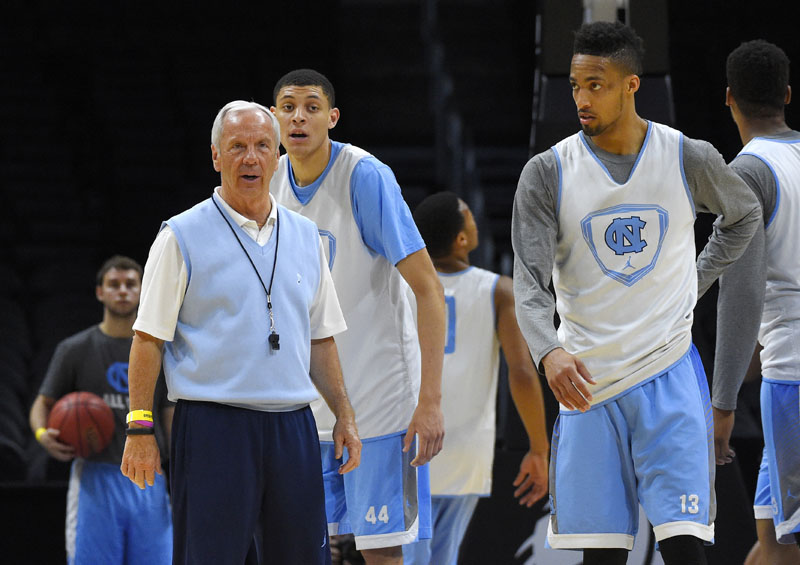 LOS ANGELES (AP) — Bo Ryan is trippin’ about being back in the NCAA West Regional.

First, the Wisconsin coach has the same man escorting him around that he did last year, when the Badgers won the regional in Anaheim. Then Ryan bumped into coach Sean Miller, whose Arizona team lost to the Badgers in a one-point overtime game to get to the Final Four.

So Ryan feels right at home in Los Angeles, and he’s hoping Frank Kaminsky & Co. do, too.

The top-seeded Badgers (33-3) take on fourth-seeded North Carolina (26-11) in a regional semifinal on Thursday night at Staples Center. The teams are meeting in the NCAA Tournament for the second time and the first since 2006. The Tar Heels won both games.

North Carolina hasn’t been this far since 2012, although the Tar Heels are 25-6 all-time in regional semifinals.

Their top task? Defending Big Ten player of the year Kaminsky, who leads the Badgers in scoring (18.4 points), rebounding (8.1), and field-goal percentage (.556).

Meeks sprained his left knee in the win over Arkansas that got the Tar Heels into the final 16. He didn’t do much during their open practice Wednesday, but had limited contact during an earlier closed practice.

Williams said if Meeks experiences any pain or swelling overnight, he wouldn’t play. Otherwise, he would be a game-time decision Thursday.

“I’m doing pretty well,” Meeks said. “I’m jumping a little bit more and trying to do all the right things so I can take care of my knee.”

If Meeks can’t go, the Tar Heels may go small, like they did after Meeks went out against the Razorbacks. But that has its drawbacks, too.

“I don’t want to just say when nobody can guard Frank, let’s just play small because that takes away part of our game as our inside scoring,” Williams said. “So it is a balance there that you have to have.”

Carolina can throw 6-9, 228-pounder Brice Johnson at Kaminsky, too.

“His combination of size and athleticism isn’t very common in college basketball,” Kaminsky said. “He does a great job of attacking the glass, getting things done inside.”

The Badgers have a question mark on their own roster, with guard Traevon Jackson’s playing status up in the air.

The senior has yet to appear in the NCAA Tournament and has missed 18 straight games since breaking his right foot in a loss at Rutgers on Jan. 11. Jackson got in a few possessions during practice on Tuesday, and Ryan said Wednesday that if he’s physically ready he would reward Jackson with some playing time.

“Now how many possessions or how many trips up and down the court, that remains to be seen,” the coach said.

Jackson made it sound like he’ll return. “I’ve been playing this game for too long to have nervousness on the court,” he said. “It’s a joy to be back on the court.”

Jackson gives the methodical Badgers a different look when he’s on the court, according to Carolina guard Marcus Paige.

“He kind of has that freedom to attack full court and give them that full court transition attack,” Paige said. “If he does play, we’re going to try to contain him because he’s really good and crafty with the ball.”

One that got away: Bronson Koenig was recruited heavily by Williams, but the guard from La Crosse decided to stay in-state and play for the Badgers. “I’ll pull for him like crazy tomorrow, I just won’t pull for his whole team to do well,” Williams said. “But he’s a big-time young man that I really enjoyed recruiting.”

Old school Bo: Ryan emphasizes limiting opponents to one shot per possession. It’s a stat he’s been keeping since he coached junior high basketball in the 1970s. Now, it’s trendy information, which makes Ryan laugh. “We just chuckle, the guys that have known me for years. ‘Hey Bo, I think you were on to something there with those points per possession,’” Ryan said. “No kidding.”